Rob Starting the day off on the Kissimmee Chain of Lakes catching some quality bass. These bass were very scrappy fighters. We caught most of our bass on spinnerbaits, Strike King Shim E Sticks and Zoom Speed Craws. Working in and around the grass beds was the big key to catching the bass out here on a consistant basis. 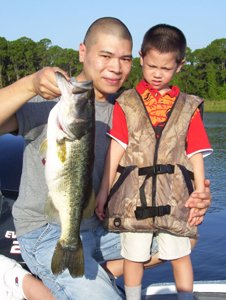 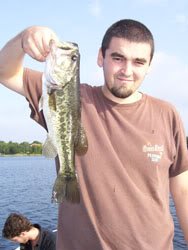 July is a hot month here in Florida, but believe me folks, the bass are still biting down here.
It’s the same thing every year, the weatherman, who is over paid and wrong 99% of the time seems to try to scare people away with crazy out of the world hurricane forecasts. We as guides follow the weather like a hawk circling over a lake in search of his next victim, the largemouth bass or crappie.

Although July is typically a hot month, you can still fish comfortably for 6 hours and catch some very nice Florida largemouth bass. Artificial lures will still be producing good.  Typically some good early morning top water action, before switching up to a Strike King Redeye Shad or  spinner bait. Senko type baits and worms will also produce good catches, as well as wild shiners. Two good lakes to bass fishing will be Lake Toho and East Lake Toho. Typically Lake Toho is known for the trophy bass, but believe me, East Lake Toho has been doing pretty good itself. Evident is when it takes 24 pounds to win a tournament, which was just done on East Lake Toho during Spring Fling. Plenty of 5 plus pound bass were weighed in. 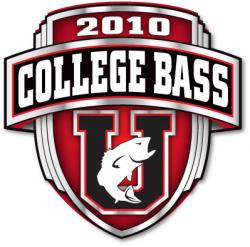 ATLANTA (Feb. 8, 2010) – College Bass, the nation’s top collegiate bass fishing tournament series, announced today, that for the first time in its history, it will add a North Super Regional tournament to be held in Fort Madison, Iowa with the Mississippi River as a backdrop June 5-6. The morning launch will take place each day at daybreak at the Riverview Marina and the daily weigh-in at Riverview Park (716 Riverview Drive) at 3 p.m. CT. Two-person teams from regional schools will compete in a two-day cumulative weight format with a five-fish daily limit.

“This is an exciting step that shows the continued growth of collegiate fishing,” said Hank Weldon, College Bass tournament director. “With the addition of another Super Regional competition, collegiate anglers will have even more opportunities to participate in competitive fishing at the college level.”

The high concentration of College Bass-sanctioned schools in the Midwest and Northern regions influenced the creation of the North Super Regional giving more schools the opportunity to contend for the coveted national collegiate bass fishing title. Collegiate bass clubs must compete in a Super Regional event in order to advance to the National Championship.

As host, Fort Madison will be in the national media spotlight with the Super Regional weigh-ins streamed live on www.CollegeBass.com, and special features from the regional competitions highlighted on ESPNU during the College Bass National Championship shows.

“We’re honored to be hosting the first College Bass North Super Regional” said Sandy Brown director of the Fort Madison Convention and Visitors Bureau. “This is the ideal way for us to showcase the great fishing here in Iowa.”

College Bass anglers will contend for the North Super Regional bragging rights on the Mississippi River, the largest river system in the U.S. The Fort Madison stretch of the Mississippi River is known for its distinct characteristic of being one of the few areas of the river that runs both east and west contributing to its popularity among both competitive and leisure fishing.

Going into its sixth year, the College Bass National Championship is considered by many to be the calendar’s premier collegiate fishing event. Last year’s North Carolina State anglers Will White and Chris Wood tipped the scales to claim the 2009 College Bass National Championship crown on the Arkansas River in North Little Rock. More than 220 schools from more than 30 states and Canada participate in hundreds of College Bass sanctioned events each season.

Collegiate anglers can register to compete in the Super Regionals by contacting Hank Weldon at hweldon@careersports.com or 770-955-1300.

Alabama River in Montgomery, Ala.

Since its inception in 2005, College Bass has been the pioneer in the emerging sport of competitive fishing at the college level with a nationally televised national championship comprised of a qualified field of student anglers. With more than 220 participating colleges and universities from more than 30 states and Canada, College Bass is a rapidly growing property with a mission of supporting student anglers and bass fishing at the club level. The 2010 season marks the sixth anniversary of the national championship event and will also feature three Super Regional events, an increase from two in 2009. Fans can follow the 2010 College Bass Tour online at www.CollegeBass.com and on ESPNU, which will televise nine hours of coverage beginning next summer

Florida Large Mouth Bass Description - The largemouth is the largest member of the sunfish family. It generally has light greenish to brownish sides with a dark lateral line which tends to break into blotches towards the tail. Often … END_OF_DOCUMENT_TOKEN_TO_BE_REPLACED

Lake Toho in Central Florida Located adjacent to the City of Kissimmee in Central Florida. The 18,810-acre West Lake Tohopekaliga has long boasted a reputation among both … END_OF_DOCUMENT_TOKEN_TO_BE_REPLACED

Butler Chain of Lakes in Orlando Florida Butler Chain of lakes in order... 1.Lake Down is the northern-most lake in the Butler Chain with 872 acres of Fish-able clear water. Public Access is located … END_OF_DOCUMENT_TOKEN_TO_BE_REPLACED

Lake George Fishing The history of Lake George fishing dates all the way back to World War II. There’s even a bombing range on the lake that was operated by the US Military in Ocala National … END_OF_DOCUMENT_TOKEN_TO_BE_REPLACED