I wanted to thank you for a great fishing trip this past Sunday. We are finally drying out but still are on cloud 9 from the fishing trip we took with you last Sunday. That is all we talked about for the rest of our trip. Chad and I want you to know how much we appreciated the extra effort you gave to get us to the lake and on the fish. I will admit the weather conditions weren’t good for the guys in the boat but they certainly were good for catching fish. I hope you realize you have now ruined our fishing here in Ohio.

I certainly will be recommending you and Bass Online in the future and Chad and I are already trying to figure out how to get back down for another trip with you.

Thanks again John!
Ron and Chad

We just had a wonderful time with Steve on the St. Johns River!

Thanks for your professionalism for handling my last two trips with your guides…the email notifications with instructions are great reminders and both Steve and Mark Rodgers were great!

Bass Fishing with your Grandson

I just wanted to say, Thank You for a great fishing trip. My grandson, Jonathan and I, went out on Lake Okeechobee with Capt. Larry Crossman on 28 Dec. 2013. It was his first trip to Lake Okeechobee (and it won’t be his last), Capt. Crossman put us on fish that I couldn’t believe for this time of year. We caught so many, that I stopped taking pictures after three hours and the boys arms were sore for a week! I have been to The Big “O” many times and used a few guides, but Capt. Crossman has been the best. Well I thought I’d send a couple of pictures of the boys and my big fish (he didn’t get his trophy so we will have to come back).

Till next time tight lines and good fishing…. From Staff Writer 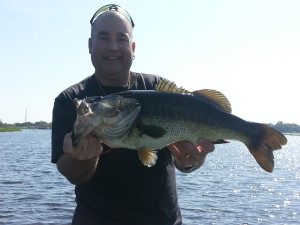 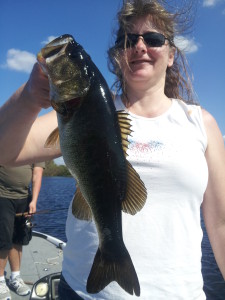 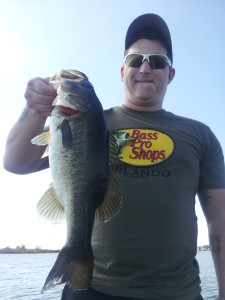 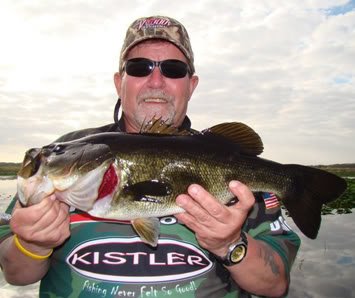 Paul on day three had his good friend Dave join us on Lake Jackson once again. Dave started out working live bait while Paul worked an arsenal of artificial baits. Tossing creature baits from zoom brush hogs to the Gene Larew Biffle Bug Paul worked it hard. Main artificial baits to produce once again was the senko type baits.

Dave had been catching some good numbers using live wild shiners and we slowly switched him over to the Yum Dinger as he had not bass fished in as he says about 20 years. Well let me tell ya folks, Dave hooked a sweet bass that would have been an easy 10 pounder with no doubts, but the hook pulls out just a matter of feet from the boat. Just minutes later Dave is working the Yum Dinger perfect, as a massive wake comes along and SLAMS his bait and the fight is on! 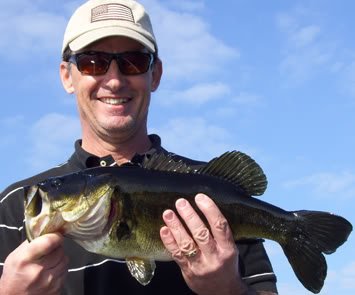 Dave was working this bass perfect, she was definitely bigger than the one he had already lost on the pulled hook, and as her back came out of the water all I could think was she is even bigger than the 11.4 pound I had caught. This baby started rippin drag and makin the reel screen, and then it happened, she got around the one darn grass patch just ten feet from the boat, wrapped herself around and shook loose. Paul and I could have sat on the deck and cried, and Dave says “ That was cool!!”

It was a great bass fishing day despite the two trophy bass getting away from us, and will definitely be a day Paul and Dave will never forget. Paul is back home in Texas and has already called me to tell me he is planning his return trip for next year.

Florida Large Mouth Bass Description - The largemouth is the largest member of the sunfish family. It generally has light greenish to brownish sides with a dark lateral line which tends to break into blotches towards the tail. Often … END_OF_DOCUMENT_TOKEN_TO_BE_REPLACED

Lake Toho in Central Florida Located adjacent to the City of Kissimmee in Central Florida. The 18,810-acre West Lake Tohopekaliga has long boasted a reputation among both … END_OF_DOCUMENT_TOKEN_TO_BE_REPLACED

Butler Chain of Lakes in Orlando Florida Butler Chain of lakes in order... 1.Lake Down is the northern-most lake in the Butler Chain with 872 acres of Fish-able clear water. Public Access is located … END_OF_DOCUMENT_TOKEN_TO_BE_REPLACED

Lake George Fishing The history of Lake George fishing dates all the way back to World War II. There’s even a bombing range on the lake that was operated by the US Military in Ocala National … END_OF_DOCUMENT_TOKEN_TO_BE_REPLACED