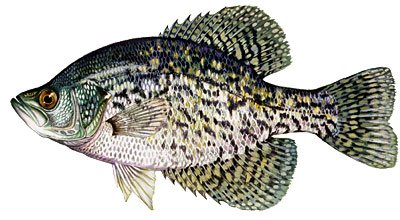 Range – Found statewide except in the Florida Keys.

Habitat – Black crappies thrive in clear, natural lakes and reservoirs with moderate vegetation. They are also found in large slow-moving less turbid rivers, provided the water is not too murky. Crappies prefer water from 70 to 75 degrees but will tolerate water over 80 degrees. It is gregarious and often travels in schools.

Spawning Habits – Spawning occurs from February to April when water temperatures reach 62 to 65 degrees. They nest in colonies. Circular nest are fanned by males over gravel or soft-muddy bottoms and frequently around submerged vegetation in waters from three to eight feet deep. After spawning, males guard the eggs and fry. Females may produce between 11,000 and 188,000 eggs.

Age and Growth – Sexual maturity is reached in the second or third year, with few fish surviving beyond their fifth year in Florida waters. The oldest crappie aged in Florida, to date, has been 11 years old.

Sporting Quality – Black crappies are excellent game fish and are highly regarded by bait fishermen and artificial-lure anglers alike. They are easily caught during prespawning periods when the fish are congregated in large schools. Trolling with small, live minnows or a spinner-fly combination is very productive. They will also strike subsurface flies, small spinners, jigs, and tiny crankbaits. Crappies tend to suspend in midwater, so you may have to experiment to find the right depth. As a sport fish, specific bag and size limit regulations apply, and you can register a qualifying catch as part of the Florida Fish and Wildlife Conservation Commission’s “Big Catch” program.

Eating Quality – Considered to be excellent eating by many anglers. The meat is prepared by rolling in cornmeal or dipping in pancake batter and deep frying, and can also be baked or broiled.

Florida Large Mouth Bass Description - The largemouth is the largest member of the sunfish family. It generally has light greenish to brownish sides with a dark lateral line which tends to break into blotches towards the tail. Often … END_OF_DOCUMENT_TOKEN_TO_BE_REPLACED

Lake Toho in Central Florida Located adjacent to the City of Kissimmee in Central Florida. The 18,810-acre West Lake Tohopekaliga has long boasted a reputation among both … END_OF_DOCUMENT_TOKEN_TO_BE_REPLACED

Butler Chain of Lakes in Orlando Florida Butler Chain of lakes in order... 1.Lake Down is the northern-most lake in the Butler Chain with 872 acres of Fish-able clear water. Public Access is located … END_OF_DOCUMENT_TOKEN_TO_BE_REPLACED

Lake George Fishing The history of Lake George fishing dates all the way back to World War II. There’s even a bombing range on the lake that was operated by the US Military in Ocala National … END_OF_DOCUMENT_TOKEN_TO_BE_REPLACED