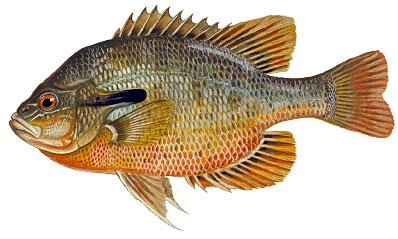 Description – The redbreast is one of the brightest colored sunfishes. Males have yellow, orange or red breast, olive upper sides, blending into blue-tinged bronze on the lower sides and blue streaks on the cheek. Females are less colorful; their breasts are yellowish or pale red. The most distinguishing characteristic of this species is a long, narrow (no wider than the eye) extension of the gill cover. These flaps, which may reach a length of one inch or more, are entirely black.

Subspecies – There are no recognized subspecies. They are known to hybridize with other members of the sunfish family.

Range – The redbreast is found throughout central and northern Florida. It is the most dominant sunfish in such streams as the Oklawaha, Ochlockonee, Suwannee, and Santa Fe rivers. This species has been introduced into the Blackwater and Yellow rivers in northwestern Florida. They are also common in some lakes such as the Harris Chain and Starke Lake in Ocoee.

Spawning Habits – They reproduce in typical sunfish fashion by constructing circular beds; but not clustered like bluegills, in water from one to three feet deep usually adjacent underwater objects such as stumps and snags. They often occupy beds that have been abandoned by other sunfishes. Spawning occurs from May through August when water temperatures range from 68 to 82 degrees. Males are the nest builders and guard the eggs and larvae for a short period after hatching. The number of eggs laid in a season ranges from about 1,000 to 10,000, varying with the age and size of the female.

Feeding Habits – The redbreast’s diet is probably the most varied of any of the sunfishes. Principal food organisms are bottom-dwelling insect larvae, snails, clams, shrimp, crayfish, and small fish.

Age and Growth – Compared to some sunfish, redbreasts grow slowly. Redbreast reach six-inches in about two to three years.  They seldom live beyond seven years and commonly reach a length of eight inches.

Sporting Qualities – Redbreasts are prized game fish and are caught on natural baits and artificial lures. They a good fighters and will bite on flies and small spinners, as well as worms, crickets, grasshoppers and small minnows. Unlike most sunfishes, redbreasts bite well at night. Fishing from a drifting or slowly powered boat is the best way to catch redbreasts, although angling from the bank can be productive. As a sport fish, specific bag and size limit regulations apply, and you can register a qualifying catch as part of the Florida Fish and Wildlife Conservation Commission’s “Big Catch” program.

Eating Quality – The sweet, flaky, white flesh is excellent eating. They are most often fried after dipping them in seasoned cornmeal or pancake batter.

Florida Large Mouth Bass Description - The largemouth is the largest member of the sunfish family. It generally has light greenish to brownish sides with a dark lateral line which tends to break into blotches towards the tail. Often … END_OF_DOCUMENT_TOKEN_TO_BE_REPLACED

Lake Toho in Central Florida Located adjacent to the City of Kissimmee in Central Florida. The 18,810-acre West Lake Tohopekaliga has long boasted a reputation among both … END_OF_DOCUMENT_TOKEN_TO_BE_REPLACED

Butler Chain of Lakes in Orlando Florida Butler Chain of lakes in order... 1.Lake Down is the northern-most lake in the Butler Chain with 872 acres of Fish-able clear water. Public Access is located … END_OF_DOCUMENT_TOKEN_TO_BE_REPLACED

Lake George Fishing The history of Lake George fishing dates all the way back to World War II. There’s even a bombing range on the lake that was operated by the US Military in Ocala National … END_OF_DOCUMENT_TOKEN_TO_BE_REPLACED