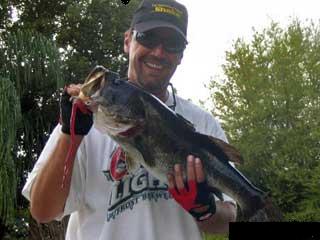 While located adjacent to one another, just south of the Orlando area, and connected by a canal, East Lake Toho and West Lake Toho are very different and have their own unique personalities.
West Lake Toho is noted to have islands, a flowing feeder creek, a long cove extending to the East, normal water clarity, and a tremendous amount of vegetation, both along the shorelines and well out into the lake.

East Lake Toho, on the other hand, is exceptionally clear, often with good visibility to depths of 7-9 feet. It contains much less vegetation than West Lake Toho and, with the exception of its northwest corner, the existing growths are basically confined to a narrow band of perimeter reeds and thin grasses. While there exists the same tannic acid stain common  as in most of the waters of Florida natural lakes, the lesser vegetation results in only a noticeable color rather than a dark stain.

East Lake is nearly circular in shape and covers approximately 12,000 acres. It is a perfect example of what is often called a dishpan’ lake. There are no continuously flowing tributaries, as such, and the lake level is maintained by the drainage influx of upper watershed lakes, run-off from the surrounding areas, and rain. 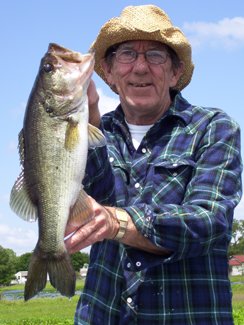 The St. Cloud Canal exits East Lake in its southwest corner and connects to West Lake Toho. The canal in navigable for a short distance, but has a lock (number S-59) which is not passable by boat.
The C-29 canal connects East Lake Toho, through Fells Cove and small Ajay Lake in the northeast corner, to the upper watershed lakes of Lake Hart and Lake Mary Jane. These two Lakes are the actual start of the famous Kissimmee waterway, which eventually stretches its way South to Lake Okeechobee.

With an average depth of 10-14 feet, and a maximum of 18 in one small location, the lake bottom is predominately clean and hard. A few good shell beds exist, as well as some bottom rock structure. The latter is somewhat difficult to find, but is well worth the effort when you do. A heavily weighted plastic worm is the best rig to use for locating these rocks, as well as the shell beds.
For those wishing to really enjoy East Lake Toho, there are two places to take a break from fishing and unwind with some good food. East Lake Fish Camp has a restaurant which serves some very good food as well as Crabby Bills, which is located at the Waterfront Park.

Florida Large Mouth Bass Description - The largemouth is the largest member of the sunfish family. It generally has light greenish to brownish sides with a dark lateral line which tends to break into blotches towards the tail. Often … END_OF_DOCUMENT_TOKEN_TO_BE_REPLACED

Lake Toho in Central Florida Located adjacent to the City of Kissimmee in Central Florida. The 18,810-acre West Lake Tohopekaliga has long boasted a reputation among both … END_OF_DOCUMENT_TOKEN_TO_BE_REPLACED

Butler Chain of Lakes in Orlando Florida Butler Chain of lakes in order... 1.Lake Down is the northern-most lake in the Butler Chain with 872 acres of Fish-able clear water. Public Access is located … END_OF_DOCUMENT_TOKEN_TO_BE_REPLACED

Lake George Fishing The history of Lake George fishing dates all the way back to World War II. There’s even a bombing range on the lake that was operated by the US Military in Ocala National … END_OF_DOCUMENT_TOKEN_TO_BE_REPLACED