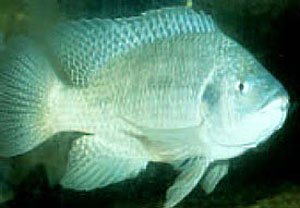 Description: O. aureus is the blue tilapia (pictured at right).  It is the most common in Florida.  Males during the breeding season are blue green with reddish edges to the fins, males and females the remainder of the year are a silvery blue.  O. mossambicus typically are darker colored from gray to black, the snout over the jaw is slightly concave and they have relatively large mouths.

Species: These four species are generally restricted; other tilapia species (ca. 100) are prohibited.  Blue tilapia are not restricted in some regions.

Range: Native range is African and the Middle East; however, in Florida these four species inhabit various portions of the southern half of the state.

Habitat: Varies from lakes and ponds to rivers and estuaries

Spawning Habitats: Each of the these species belong to a group in which the male digs a nest, and the female than picks up the fertilized eggs in her mouth to protect and aerate them.  The female continues to allow the small fry to return to her bucchal cavity (mouth) for protection when predators threaten.

Feeding Habits: Omnivorous feeding mostly benthically.  Although not true filter feeders they can gather phytoplankton/zooplankton in a mucous-like substance and swallow the bolus for nutrition.

Age and Growth: Rapidly maturing, the larger species like the blue tilapia can reach 10 pounds.

Potential Concerns: Only these four species of tilapia, which were requested for use in the aquaculture industry under strict permit criteria and following extensive research, are listed as restricted, all others are prohibited.   Further range expansion and competition with native species.

Florida Large Mouth Bass Description - The largemouth is the largest member of the sunfish family. It generally has light greenish to brownish sides with a dark lateral line which tends to break into blotches towards the tail. Often … END_OF_DOCUMENT_TOKEN_TO_BE_REPLACED

Lake Toho in Central Florida Located adjacent to the City of Kissimmee in Central Florida. The 18,810-acre West Lake Tohopekaliga has long boasted a reputation among both … END_OF_DOCUMENT_TOKEN_TO_BE_REPLACED

Butler Chain of Lakes in Orlando Florida Butler Chain of lakes in order... 1.Lake Down is the northern-most lake in the Butler Chain with 872 acres of Fish-able clear water. Public Access is located … END_OF_DOCUMENT_TOKEN_TO_BE_REPLACED

Lake George Fishing The history of Lake George fishing dates all the way back to World War II. There’s even a bombing range on the lake that was operated by the US Military in Ocala National … END_OF_DOCUMENT_TOKEN_TO_BE_REPLACED