Bass fishing on East Lake Toho. Bass were busting this Strike King Redeye Shad up in a big way. I was burning this lure around grass beds when the bass would just hammer it.

Fuse, a rounder, thermally-fused braided line, is produced from 100 percent Dyneema fiber. With Sufix’s unique bonding technology, this line has added body and is designed with enhanced smoothness – resulting in a superior casting line.

Add superior tensile and knot strength, paired with virtually zero stretch, and anglers have an ideal line for any species.

MINNETONKA, Minn.- It all started with the Classic Original Floater from Rapala®, and at first glance anglers can see the family resemblance with the new hard-flashing Flat Rap®, but this new family member has a few new tricks to offer.

“The Flat Rap is really unique. It captures a little bit of a Shad Rap® and a little bit of a Minnow Rap® but produces an action all its own because of its flat sides,” explains Mark Fisher, Rapala director of field promotions. “The Flat Rap has a hard-rolling action that is paired with a quicker, tighter, wounded-minnow display.”

Its flat sides and scooping triangular lip combine to generate a hard flashing side-to-side action that screams “eat me” as it slices through the water between two and five feet. Balsa construction allows anglers to pause the Flat Rap on the retrieve, which sends the lure into a slow-rise, mimicking an exhausted, wounded baitfish – they can twitch it again to bring it back to life but will need to hold on; the strike’s about to hit.

“The Flat Rap is a great lure that will become a go-to staple in an angler’s arsenal,” says Fisher. “It’s a versatile lure that can be cast or trolled, for multiple species.”

With the Flat Rap’s long, flat body and VMC® Black Nickel Treble Hooks, anglers can cast farther and needn’t worry about having to tell the story about the one that got away.

Each Flat Rap is hand-tuned and tank-tested to ensure it embodies the fish-catching action Rapala is known for.

PHOENIX – While most people were huddled indoors out of the torrential rain on Dec. 7 while a major winter storm pummeled the state, John Davis was enjoying a fishing bonanza at Lake Pleasant, including landing a new inland state record striped bass.

“I’ve never experienced anything quite like it, they were hitting topwater all day long in the rain. It was really something,” Davis said.

Arizona Game and Fish Department officials say John’s monster striper weighed in at 28.58 pounds and measured 45.7 inches long. He caught the behemoth on a Zara Super Spook, which is a topwater lure.

What’s more, he was the only angler out there braving the storm, and reaping the benefits.

John said the behemoth striper actually hit the lure twice without being hooked, but came back a third time. John was amazed he could even land the fish – it ran like a runaway freight train, tearing off line and it took him some time to subdue the giant.

Davis would like to have the striper mounted, or at least have a replica of it created.

Davis, a Phoenix resident, routinely fishes Lake Pleasant, but said he has never seen such phenomenal topwater action before. “The stripers were in a feeding frenzy in Humbug Cove. I was getting multiple hits on my topwater lures, all day long. It was amazing.”

John said the sometimes it rained very hard, but the wind didn’t blow, so it wasn’t too bad out there. “Actually, it was kind of nice.”

It’s always nice when you hit the jackpot. John caught and mostly released around 50 stripers during his rain-soaked, day-long fishing bonanza.

Game and Fish biologists said research studies at Lake Pleasant have shown that the majority of striped bass congregate in the northern coves during winter, especially over submerged creek and river channels.

“The striper fishing at Lake Pleasant has really taken off the past several years. In fact, the striper bite last winter was pretty remarkable – anglers were routinely catching dozens of fish. It looks like we are off to a good start again this winter,” said Fisheries Chief Kirk Young.

Lake Pleasant has not always had stripers, but it is the only lake in the state with white bass. However, when the Waddell Dam was raised in the early nineties, Central Arizona Project water from the Colorado River began being pumped into this popular desert reservoir on the Agua Fria River. Eventually, striped bass from the Colorado River got into the lake.

The Arizona Game and Fish Department prohibits discrimination on the basis of race, color, sex, national origin, age, or disability in its programs and activities. If anyone believes that they have been discriminated against in any of the AGFD’s programs or activities, including employment practices, they may file a complaint with the Deputy Director, 5000 W. Carefree Highway, Phoenix, AZ 85086-5000, (602) 942-3000, or with the Fish and Wildlife Service, 4040 N. Fairfax Dr. Ste. 130, Arlington, VA 22203. Persons with a disability may request a reasonable accommodation or this document in an alternative format by contacting the Deputy Director as listed above.

Angler Innovations is a company founded by and dedicated to fishermen and their love of the sport. The company was born on the water by two tournament bass anglers when they realized a need for quality fishing accessories that were unavailable. As they considered the rather large investment they had in rods, reels and tackle it was apparent that there was a limited product offering on the market to protect their equipment. A search of the retail sport fishing outlets, internet and numerous industry shows indicated the lack of a one piece rod and reel cover that could be aesthetically pleasing with a custom fitted look that would hold up to the rigors of  heavy use and so the “Rod Jacket” was born.

The first task they encountered in developing the “Rod Jacket” was to find a material that would incorporate all of the features necessary for a rod and reel cover that could be form fitted, have that custom look, could hold up to heavy use and could withstand the elements and problems found around the water. To address these problems the material needed to be U V stabilized, mold, mildew and corrosion resistant and needed the ability to remain soft and supple so the cover could be installed and removed from the rod and reel with ease.. They also wanted a material that would allow for the rod and reel to be fully rigged at all times. The line needed to be protected and the hook or lure fastened in place without the hooks becoming entangled in the cover material while still affording full protection to the rod blank, guides and rod tip.

Angler Innovations realizes that an angler has given a great deal of thought as to which combo is exactly right for the type of fishing they enjoy. Regardless of whether you fish in fresh or saltwater, Angler Innovations believes that you will reach the same conclusion as they did regarding the protection of that rod and reel.  For a fraction of the purchase price of a new rod and reel combo consider The Ultimate Protection” The Rod Jacket”. Please visit us at our web site www.anglerinnovationsusa.com for additional information about this product and other products that will debut shortly.

This is a story, from a very good client and friend of mine, it’s a brief story about his time on the water as a spotter for a professional tournament.

Well, I have finally attended my first Bass Tournament and it was above and beyond any of my expectations.  I attended this tournament not as a competitor but as an observer.  By this I mean I went out with a different Pro angler the first two days of the competition. 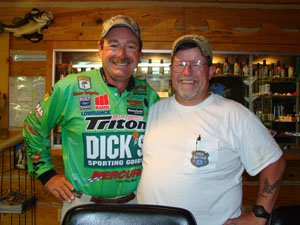 As a first time tournament experience, this is definitely the way to go.  Not only do you get to experience everything from launch to weigh-in but you also get two eight hour one-on-one sessions with a pro to pick his brain, in essence, two private seminars.  What type of line or lure used, favorite technique, extra equipment to bring, personal routines, full or part time pro angler, these were just a few of the things I was able to ask about. 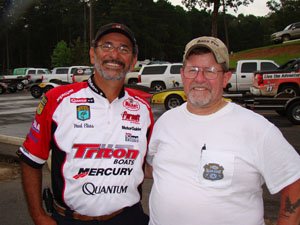 An extra benefit was that a lot of the top pro’s from the BASS & FLW circuits were there and I got to have my picture taken with them.  They were all very nice & very approachable.  I learned the value of having a good sun block and also a top quality rain suit, not the cheap kind that you can get at a convenience store. All in all, it was a very eye opening experience and one I can’t wait to do again.  I strongly encourage everyone to give it a try, first timers & veterans alike.

Florida Large Mouth Bass Description - The largemouth is the largest member of the sunfish family. It generally has light greenish to brownish sides with a dark lateral line which tends to break into blotches towards the tail. Often … END_OF_DOCUMENT_TOKEN_TO_BE_REPLACED

Lake Toho in Central Florida Located adjacent to the City of Kissimmee in Central Florida. The 18,810-acre West Lake Tohopekaliga has long boasted a reputation among both … END_OF_DOCUMENT_TOKEN_TO_BE_REPLACED

Butler Chain of Lakes in Orlando Florida Butler Chain of lakes in order... 1.Lake Down is the northern-most lake in the Butler Chain with 872 acres of Fish-able clear water. Public Access is located … END_OF_DOCUMENT_TOKEN_TO_BE_REPLACED

Lake George Fishing The history of Lake George fishing dates all the way back to World War II. There’s even a bombing range on the lake that was operated by the US Military in Ocala National … END_OF_DOCUMENT_TOKEN_TO_BE_REPLACED