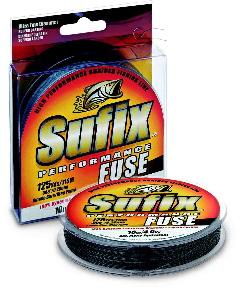 Fuse, a rounder, thermally-fused braided line, is produced from 100 percent Dyneema fiber. With Sufix’s unique bonding technology, this line has added body and is designed with enhanced smoothness – resulting in a superior casting line.

Add superior tensile and knot strength, paired with virtually zero stretch, and anglers have an ideal line for any species.

Shake, Rattle and Troll with Trolls-To Series From Rapala

MINNETONKA, Minnesota – Bass anglers rejoiced when Rapala revolutionized the way they fished, thanks to the Dives-To-series of crankbaits. And now, they’ve done it again by translating the same dives-to-a-depth concept, technology and performance to trolling applications with the TT or Trolls-To™ Series.

Like its DT® Series predecessor, the Trolls-To-Minnow and Trolls-To-Shad are designed to quickly dive to their designated trolling depth and stay there throughout the duration of the trolling passes.

“The Trolls-To is a simple system that takes the guesswork out of getting your lure to the right depth, to locate and catch fish,” remarks Chris Gilman, Rapala pro staff member and trolling aficionado. “All you have to do is tie on the right Trolls-To Series lure, reach the desired depth and get ready to catch some fish.”

The Trolls-To-Minnow and the Trolls-To-Shad both come in two sizes and run exactly as designed. Trolls-To size 15 lures run precisely at the 15-foot level by letting out 100 feet of 10-pound-test monofilament line, while the Trolls-To size 20 lures torpedo down to the 20-foot level, allowing anglers to cover a deeper range with the same length of line.

Anglers are able to fine-tune the running depth by simply making slight line length modifications. To significantly alter the running depth of the Trolls-To lures, they can simply switch from monofilament to braided line, allowing the lures to dive as much as 25 percent deeper.

“Rapala Trolls-To Series lures have an erratic searching action that triggers open-water suspended fish like crazy,” explains Gilman. “They run straight for a while, and then the lure will suddenly veer to one side or the other, mimicking a wounded or frightened baitfish – perfect for catching girth-busting walleyes.”

With the lures internal rattle, paired with their realistic swimming action of balsa construction, anglers have a sure thing – especially at trolling speeds of 1 to 2 1/2 mph that enthusiasts know are ideal for catching monster walleyes, pike and even salmon and trout.

Rapala Trolls-To-Minnow and Trolls-To-Shad lures come in 12 forage-imitating color patterns and each features strong VMC black nickel trebles that hook and hold on the strike.

Hang on. You’re about to experience the troll of a lifetime.

Check out the Trolls-To-Minnow and Trolls-To-Shad video at www.rapala.com/how2tv/.

Florida Large Mouth Bass Description - The largemouth is the largest member of the sunfish family. It generally has light greenish to brownish sides with a dark lateral line which tends to break into blotches towards the tail. Often … END_OF_DOCUMENT_TOKEN_TO_BE_REPLACED

Lake Toho in Central Florida Located adjacent to the City of Kissimmee in Central Florida. The 18,810-acre West Lake Tohopekaliga has long boasted a reputation among both … END_OF_DOCUMENT_TOKEN_TO_BE_REPLACED

Butler Chain of Lakes in Orlando Florida Butler Chain of lakes in order... 1.Lake Down is the northern-most lake in the Butler Chain with 872 acres of Fish-able clear water. Public Access is located … END_OF_DOCUMENT_TOKEN_TO_BE_REPLACED

Lake George Fishing The history of Lake George fishing dates all the way back to World War II. There’s even a bombing range on the lake that was operated by the US Military in Ocala National … END_OF_DOCUMENT_TOKEN_TO_BE_REPLACED