MINNETONKA, Minn.- It all started with the Classic Original Floater from Rapala®, and at first glance anglers can see the family resemblance with the new hard-flashing Flat Rap®, but this new family member has a few new tricks to offer.

“The Flat Rap is really unique. It captures a little bit of a Shad Rap® and a little bit of a Minnow Rap® but produces an action all its own because of its flat sides,” explains Mark Fisher, Rapala director of field promotions. “The Flat Rap has a hard-rolling action that is paired with a quicker, tighter, wounded-minnow display.”

Its flat sides and scooping triangular lip combine to generate a hard flashing side-to-side action that screams “eat me” as it slices through the water between two and five feet. Balsa construction allows anglers to pause the Flat Rap on the retrieve, which sends the lure into a slow-rise, mimicking an exhausted, wounded baitfish – they can twitch it again to bring it back to life but will need to hold on; the strike’s about to hit.

“The Flat Rap is a great lure that will become a go-to staple in an angler’s arsenal,” says Fisher. “It’s a versatile lure that can be cast or trolled, for multiple species.”

With the Flat Rap’s long, flat body and VMC® Black Nickel Treble Hooks, anglers can cast farther and needn’t worry about having to tell the story about the one that got away.

Each Flat Rap is hand-tuned and tank-tested to ensure it embodies the fish-catching action Rapala is known for. 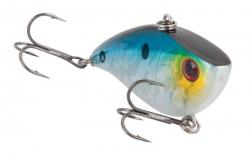 XCalibur’s XRK One Knocker series of lipless crankbaits is complete with the addition of the new XRK25, the smallest of the family of unique-sounding lures. The One Knocker’s single tungsten-lead ball bearing rattle is the difference. When every angler on the lake is throwing multi-rattle baits, the unique sound of the One Knocker continues to fool wary bass.

XCalibur’s One Knocker Series now includes sizes of 1-ounce, ¾-ounce and ½-ounce in addition to the new ¼-ounce size, making it easy to match the size of the baitfish no matter the time of year. The new XRK25 features inline hooks that rest against the body on the retrieve to promote a straight and true retrieve, and to keep it more snag-free, especially when banged into cover. The etched scale patterns and detailed gill plates, 3-D red eyes and baitfish profile create a visually appealing appearance to fish and fishermen alike. The loud “thump” of the rattle attracts fish, and the appearance gives them nothing but confidence that they are getting a free lunch. Plus, its aerodynamic shape casts like a rocket.

“With the new Trigger X Aggression, anglers are armed with soft baits to turn inactive fish on and make actively feeding fish eat more – it’s the best of both worlds,” says Fisher.

Improved body shapes have been meticulously fine-tuned and the precise bio-salt infused formula matches the baits density to body shape for maximum action. The new line of Trigger X also features Phthalate-free composition that eliminates that “plastic” smell found in other soft baits.

The new line of Trigger X Aggression is available in easy to handle black sealed bags and they come moist with the Ultrabite Aggression Formula so anglers don’t worry about anything spilling out.

Florida Large Mouth Bass Description - The largemouth is the largest member of the sunfish family. It generally has light greenish to brownish sides with a dark lateral line which tends to break into blotches towards the tail. Often … END_OF_DOCUMENT_TOKEN_TO_BE_REPLACED

Lake Toho in Central Florida Located adjacent to the City of Kissimmee in Central Florida. The 18,810-acre West Lake Tohopekaliga has long boasted a reputation among both … END_OF_DOCUMENT_TOKEN_TO_BE_REPLACED

Butler Chain of Lakes in Orlando Florida Butler Chain of lakes in order... 1.Lake Down is the northern-most lake in the Butler Chain with 872 acres of Fish-able clear water. Public Access is located … END_OF_DOCUMENT_TOKEN_TO_BE_REPLACED

Lake George Fishing The history of Lake George fishing dates all the way back to World War II. There’s even a bombing range on the lake that was operated by the US Military in Ocala National … END_OF_DOCUMENT_TOKEN_TO_BE_REPLACED