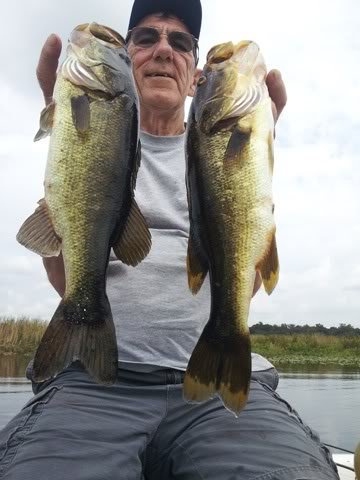 Today we had Amy and her father out on the Kissimmee Chain of Lakes,

To help the dynamic duo catch their bass. The day was spent tail hooking the shiners and letting them swim into grass beds and as they did they got hammered. This was only a 4 hour trip but was very action packed with both of them catching several to make what was a great day on the waters. We did spot several bass beds up in the shallows some of which were holding bass on them. Waters were running 62 degrees with most of the action coming as the waters were warming up as the sun poked out. Best course of action has been to start in the northwest corner in the morning as these are the waters that will warm up first as the sun comes up, from there it has been working the side where the wind is blowing as this cause the bait to blow up to and into the grass beds and gives the bass an easy target. Brave out the wind and you will catch the bass.

The past week we have had several runs out to Butler Chain.
With mixed conditions the action has gne from having to really work to catch them to so super bang up days.
With the cleaner waters on Butler even the bad weather days has still produced some great bass using artificial lures.

The Gitem Toad in the brand new color Rainbow worked thru lily pads has been a great producer as well as the Gitem AKA. Lake Tibet has slowed a bit for us, so we made the move to Lake Down, working grass beds and points has been very productive. Start by searching with rattle traps then slow it down with either an AKA or a Warlock with 1/16th bullet weight pegged and watch the line carefully as they hit on the fall.

Kissimmee chain has seen some rough waters with the high winds as of late, forcing us into wind protected areas and pitching wild shiners to grass bed edges to get our catch.

Normally wind blown areas have produced great for us, but there are those times when the combination of winds and waves will dictate a move as safety always comes first.

We are expecting as the weatherman says 3 fronts back to back so be safe out there, all to often we see people thinking they can handle the winds, but when they hit 20mph on ANY lake, you really need to think if its really worth the risk. Catch and release allows the bass to be caught another day, safety first allows the angler to fish another day.

Dates are booking very fast so call or e-mail us
Look for us at B.A.S.S Classic the 23rd and 25th

Gitem AKA with 1/16th bullet pegged and dropped into grass bed potholes as well as hydrilla patches has been also producing very good. Ribbed body on the AKA creates a great disturbance in the water and has really got the bass keyed into it. White/pink spinnerbaits slow rolled has also produced very good. Working mainly points of the grass beds on the outsides of the wind blown side has been the ticket

Butler Chain is still producing some very good number on artificials as well.
Big ticket bait has been a black/red lizard with a 1/16th bullet pegged on 10 pound test mono, worked slowly thru eel grass and flooded timber. Carolina rigged and drop shot baits have been good also as usual. Drop shot bait of choice has been a bubble gum trick worm and Carolina rig bait of choice has been the Gitem Shad in watermelon. Cleaner waters has dictated long casts and baits worked slowly as the waters had cooled in areas to mid to upper 50’s.

Today’s water temp at days end was 63 and with warmer weather the rest of the week will heat the waters up and really turn them on and make for even better action. ALWAYS keep a spook tied on as there have been shad busts on the water.

Feb 16th and the 17th had us venturing out on the Kissimmee Chain of Lakes with combination trips of shiners and artificial baits. Morning bite had generally started out on the rather slow side, even with shiners being slow trolled, as the sun poked out tho the bite picked up greatly.

Slow trolled shiners along grass beds were excellent producers fr numbers and size. As the days warmed up, pitching Gitem Sugars into grass beds was a great ticket to keep the bass being hauled into the boat.

Feb 18th we had clients out on Eagle Lake, slow trolled shiners had produced 3 bass while the Gitem Shad in watermelon color produced another 16 bass.
All bass were caught n very shallow waters, 2 foot or less. Several beds had been spotted but were still vacant.

Feb 20th and 21st we were back at it again out n the Kissimmee Chain. These two days clients wanted nothing but wild shiners. Again the bite had started out slow, VERY thick fog forced us to start both days out in the ramp area slow trolling along grass beds till the fog lifted enough for us to make a move to a few open water areas that have been producing as of late.

Open water areas had been producing fewer bass BUT the bass were of better quality and more aggressive as they were making the move to the bedding areas. 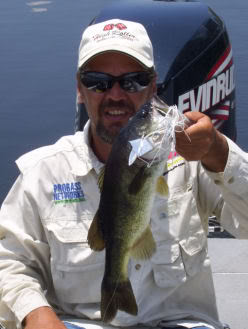 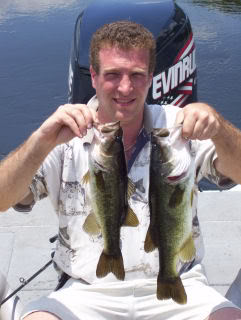 Florida Large Mouth Bass Description - The largemouth is the largest member of the sunfish family. It generally has light greenish to brownish sides with a dark lateral line which tends to break into blotches towards the tail. Often … END_OF_DOCUMENT_TOKEN_TO_BE_REPLACED

Lake Toho in Central Florida Located adjacent to the City of Kissimmee in Central Florida. The 18,810-acre West Lake Tohopekaliga has long boasted a reputation among both … END_OF_DOCUMENT_TOKEN_TO_BE_REPLACED

Butler Chain of Lakes in Orlando Florida Butler Chain of lakes in order... 1.Lake Down is the northern-most lake in the Butler Chain with 872 acres of Fish-able clear water. Public Access is located … END_OF_DOCUMENT_TOKEN_TO_BE_REPLACED