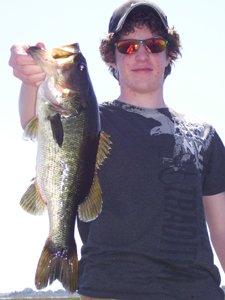 . Several trips out on Lake Toho have produced some good numbers and some good sized bass. For the most part, our clients have preferred using artificial baits and the bass played very good for us. North end of Lake Toho has been a good producer for us, pitching soft plastics along weed edges and isolated drifting clumps of grass. 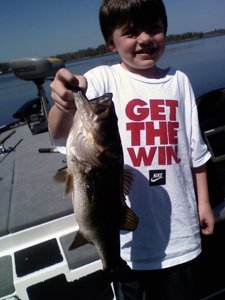 Mid lake area of Lake Toho has seen some scattered catching for us, most of the bass

have come from areas with scattered hydrilla with some very limited bass schooling action. Toads worked thru grasses have yielded some aggressive strikes, when the hooked up was missed, tossing a worm or senko as a back up was the way to catch them.

Gobblets Cove has been the place to be. Grass beds have been holding some steady action for us, as well as scattered or thinned out lily pad areas. The Azuma Shaker Z has been the hot ticket back here for us. The bass have hammered this lure hard! Spinner baits have also been producing pretty well out here as well. Tossing to back side of lily pad fields and slow rolling them thru the pads has been very good, once you got the hook up, holding the rod high until you worked them thru the pads has been the trick to landing your catch.

Southern end of Lake Toho has still produced some bass for us, although as of late it has been more of a one here one there kind of bite. Friars Cove had been the best area south for us, mostly in the area of the cypress tree lines.

Florida Large Mouth Bass Description - The largemouth is the largest member of the sunfish family. It generally has light greenish to brownish sides with a dark lateral line which tends to break into blotches towards the tail. Often … END_OF_DOCUMENT_TOKEN_TO_BE_REPLACED

Lake Toho in Central Florida Located adjacent to the City of Kissimmee in Central Florida. The 18,810-acre West Lake Tohopekaliga has long boasted a reputation among both … END_OF_DOCUMENT_TOKEN_TO_BE_REPLACED

Butler Chain of Lakes in Orlando Florida Butler Chain of lakes in order... 1.Lake Down is the northern-most lake in the Butler Chain with 872 acres of Fish-able clear water. Public Access is located … END_OF_DOCUMENT_TOKEN_TO_BE_REPLACED

Lake George Fishing The history of Lake George fishing dates all the way back to World War II. There’s even a bombing range on the lake that was operated by the US Military in Ocala National … END_OF_DOCUMENT_TOKEN_TO_BE_REPLACED