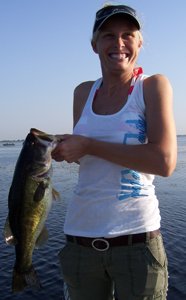 Bass fishing on East Lake Toho has been doing great. Schooling activity had slowed down first thing in the morning for us, and towards the end of the week the bass were a little more scattered out than in previous trips.

Strike King Redeye Shad still has been the bait of choice out here. Tonya had been a real trooper tossing this bait around, while her husband Mike had missed a few as they shook off close to the boat, and a few others following him all the way back to the boat.

Mike was catching a few scattered around when we heard Tonya say she had one on. We both turned and looked and sure enough, she had the big gal of the day right next to the boat, after a few serious head shakes from this gal, we had her in the net and snapping pictures of her.  This bass came in easily between 5 ½ and 6 pounds. 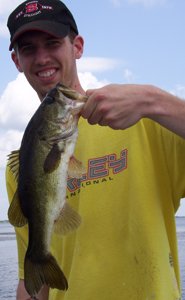 Before I got married on June 6th of this year, I had some fun time on the water with my son. We managed to spend some time on East Lake Toho tossing around Strike King Redeye Shads and senko type baits. We managed to boat a few good solid bass even in the heat of the day. Most of our action came on the East side of the lake around the offshore grasses and some around the reeds.

West Lake Toho has been on fire as far as big bass being caught. This insane weather pattern we had to start the year off had changed all the normal typical patterns, prespawn, spawn and post spawn so the big bass fishing action has continued later into the season than usual.

Florida Large Mouth Bass Description - The largemouth is the largest member of the sunfish family. It generally has light greenish to brownish sides with a dark lateral line which tends to break into blotches towards the tail. Often … END_OF_DOCUMENT_TOKEN_TO_BE_REPLACED

Lake Toho in Central Florida Located adjacent to the City of Kissimmee in Central Florida. The 18,810-acre West Lake Tohopekaliga has long boasted a reputation among both … END_OF_DOCUMENT_TOKEN_TO_BE_REPLACED

Butler Chain of Lakes in Orlando Florida Butler Chain of lakes in order... 1.Lake Down is the northern-most lake in the Butler Chain with 872 acres of Fish-able clear water. Public Access is located … END_OF_DOCUMENT_TOKEN_TO_BE_REPLACED

Lake George Fishing The history of Lake George fishing dates all the way back to World War II. There’s even a bombing range on the lake that was operated by the US Military in Ocala National … END_OF_DOCUMENT_TOKEN_TO_BE_REPLACED