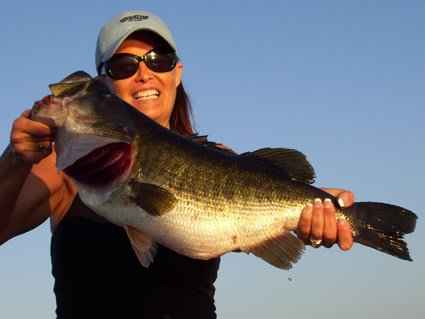 What can I say, the months of March and April have seen some very good bass fishing. We have been hitting several different bodies of water. East Lake Toho had been doing good for us for a good stretch and then the action started to slow down a bit too much for my liking. Spinner baits, flukes and stick baits had been the hot ticket baits out here until things slowed down.

We made the move to Starke Lake in the small town of Ocoee where there was some good action, this place can definitely be a good numbers lake for bass fishing, and if you’re looking to take a break for lunch, the Ocoee Café has some great food, just a matter of minutes from the lake. 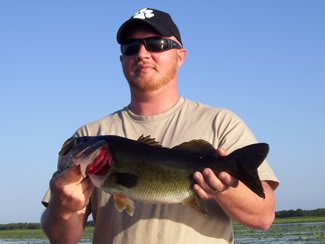 Lake Jackson has still been fishing great. Live wild shiners have been producing not only some good number but some darn good sized bass as well. Just ask Vonda Ward, as her and husband Mike came down for some great bass fishing action on Lake Jackson. Vonda had informed me that she had never caught a largemouth bass before, plenty of catfish and such, but never a bass. I told her not to worry she WILL catch some bass, and folks she was on fire! Her first bass of the day, took a little long than expected, maybe 30 minutes but she handled this big gal like a true pro! Gave her one heck of a fight, and in the end she was holding this 7 pound largemouth bass for some pictures and some great memories for sure.

Mike did a great job working the artificial lures himself, catch a scattering of bass around the lake using spinner baits and senko type baits, let me tell you, hats off to the folks at Pure Fishing, for which I am now a team member of, these new Veritas rods we are using have been absolutely awesome, a much lighter rod and tons of hook setting power.

Florida Large Mouth Bass Description - The largemouth is the largest member of the sunfish family. It generally has light greenish to brownish sides with a dark lateral line which tends to break into blotches towards the tail. Often … END_OF_DOCUMENT_TOKEN_TO_BE_REPLACED

Lake Toho in Central Florida Located adjacent to the City of Kissimmee in Central Florida. The 18,810-acre West Lake Tohopekaliga has long boasted a reputation among both … END_OF_DOCUMENT_TOKEN_TO_BE_REPLACED

Butler Chain of Lakes in Orlando Florida Butler Chain of lakes in order... 1.Lake Down is the northern-most lake in the Butler Chain with 872 acres of Fish-able clear water. Public Access is located … END_OF_DOCUMENT_TOKEN_TO_BE_REPLACED

Lake George Fishing The history of Lake George fishing dates all the way back to World War II. There’s even a bombing range on the lake that was operated by the US Military in Ocala National … END_OF_DOCUMENT_TOKEN_TO_BE_REPLACED