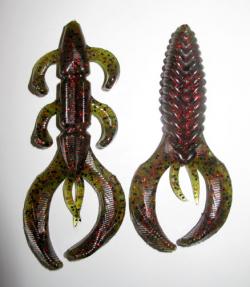 YUM Soft Plastics announces the introduction of F2, independently tested to be 30 percent more effective than the leading attractant. Six bait styles are infused with this powerful scent, and unlike other attractant-injected baits, YUM F2 retains its suppleness and “swimability.” They also don’t dry into hard, wrinkled and useless shrivels when left out of the package.

Attract. Enrage. Engage. F2, or Ferocity Squared, is a highly concentrated formula clinically tested by the Mississippi State University under the strictest scientific conditions. The result is documented proof that bass prefer YUM F2 by 30 percent. Additional advantages include its ability to be infused in traditional soft plastics in any shape, long-lasting effectiveness and continuous dispersal of scent.

YUM F2 is initially available in four new bait styles and two existing YUM baits. The new baits include the Wooly Bullee, a flippin’ style bait; the Mighty Bug, a six-legged creature bait in three sizes; the Sallee-mander, a 6-inch swimming lizard; and the Shakealicious Worm, a 6-inch shaky head worm with an undulating skirt at the head. YUM Dingers and Money Craws also have been infused with F2.

YUM F2 just took over the top spot in bass attractants. It’s documented. It’s been proven in the strictest clinical scientific testing. Bass prefer F2. It’s the most-effective attractant on the market. Look for F2 taking over your local tackle shop or at www.lurenet.com.

Florida Large Mouth Bass Description - The largemouth is the largest member of the sunfish family. It generally has light greenish to brownish sides with a dark lateral line which tends to break into blotches towards the tail. Often … END_OF_DOCUMENT_TOKEN_TO_BE_REPLACED

Lake Toho in Central Florida Located adjacent to the City of Kissimmee in Central Florida. The 18,810-acre West Lake Tohopekaliga has long boasted a reputation among both … END_OF_DOCUMENT_TOKEN_TO_BE_REPLACED

Butler Chain of Lakes in Orlando Florida Butler Chain of lakes in order... 1.Lake Down is the northern-most lake in the Butler Chain with 872 acres of Fish-able clear water. Public Access is located … END_OF_DOCUMENT_TOKEN_TO_BE_REPLACED

Lake George Fishing The history of Lake George fishing dates all the way back to World War II. There’s even a bombing range on the lake that was operated by the US Military in Ocala National … END_OF_DOCUMENT_TOKEN_TO_BE_REPLACED