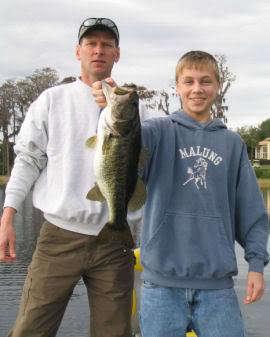 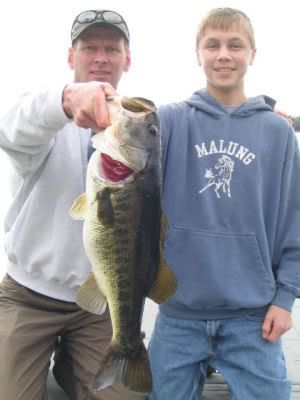 This report is for Wednesday the 24th, today I once again had the great pleasure of having Rod and his son Shawn back out on the Butler Chain, and once again the Chain did not let us down. This time we worked Lakes Chase and Lake Blanche and once again the bass did not let us down. Altho with a different weather pattern at hand, colder in the morning and much less sun than the previous day, we still got our catch, and almost got another 10 pounder.

Rod had a hook up with one that would have been bigger than the 10 pounder from the previous day, hooking up with her 4 times, first time she took him into the grasses and broke off, second time she got into the structure and worked loose, 3rd and 4th time she managed to shake off before getting to the boat, the back on this gal was huge as we watched her surface after his shiner 3 different times and the wake she kicked out had the guys excited for hours.

This is the time of year to catch some serious bass on Butler, and as Rod knows, not having caught a 10 pound bass until yesterday, and having a shot at 3 of them in 2 days, this chain does hold some very good action, as he said “ that was exciting seeing her do all that” as the big gal attacked his bait. Its always great to have a father and son on the water, catching quality bass and enjoying eachother, that, in itself made the day complete.

Today I had the great pleasure of having a great father and son trip on the Butler Chain.

Rod and his son Shawn wanted to get in on some great bass fishing action, and believe me, the bass did not let them down. The guys had opted for shiners and the bass agreed with their choice of baits, 2 minutes in to the trip, Shawn hooks up a beautiful 4 pound bass as she was cruising by one of many beds we spotted today. The guys were hooking bass here and there throughout the chain as we moved from Little Lake Down to Wauseon Bay, and over to Lake Chase. Every area we hit we had some action, and believe me folks, this was one of those days that dreams were made of, the guys caught one bass that was around 1 ½ pounds, and all the others were 4 pounds or better, with their best 5 bass coming in at just over 30 pounds.

The highlite of the days was when Rod had tossed his bait out, and in a matter of minutes the fight was on, this bass hosed his bait and ran all over the place, almost getting hung in the big motor, then making a move and almost tagging the trolling motor before Rod got her under control, and catching his first ever 10 pound bass, as this gal weighed in at a nice 10.25 pounds on the digital scale. Second biggest bass was caught by his son Shawn, which came in at just over 6 ½ pounds.

They did have another big gal hooked up but with a few shakes of the head, she found her way to freedom, close to having 2 bass over 10 pounds, but it just wasn’t in the cards for today. 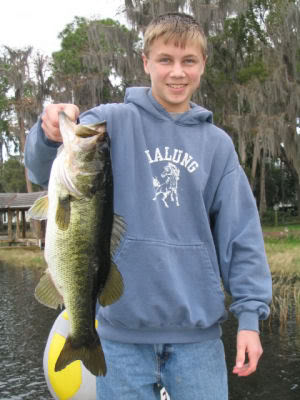 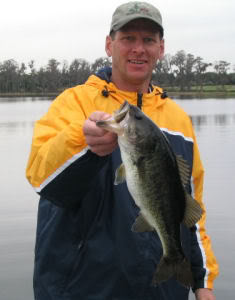 This past week I had several trips out on Butler Chain, with the weather playing games with us, we watched bass going from beds to heading back to deep water drop offs. Several bass this week had been caught off beds in various lakes on the chain, using mostly Junebug lizards to get them. Lake Down and Little Lake Down early on in the week seemed to be the hot ticket to catching bass, in and along the grass beds as well as off of bed. Most of the beds spotted were in 2 foot to up to 8 foot of water.

After two days of a slight cool down, bass were pushed off the beds but you could still see and catch them as they were still in the general area of the beds, just cruising around, occasionally cruising thru the bed. A few days we had catches of 20 bass using nothing but weighted Gitem Shads and working them real slowly, as the cool down came, the bite did drop off but you still got your catch, just working very slowly.

Chris came down from New York and had some descent action on Butler, as he caught the tail end of the cool down, asking me to also fish with him, I got him up on the weighted Shads, which he had said he had never used them with a weight, I had tossed to shoreline and Chris made a cast close to the boat to check the action, I had landed a nice 2 ½ pounder, Chris had made his second cast right behind me, and instantly got hammered, and the fight was on, landing a very nice bass just shy of 5 pounds. The bite was very a light one, with you getting light taps, you had to let them take the bait and swim off with it some before you set the hook, other than the very aggressive one that Chris had gotten.

White spinner baits and a 10” Junebug worm were also catching bass, spinner baits had to be slow rolled and worked in and around grass beds, big key was having some type of drop off close by or other types of cover such as eel grass or hydrilla. Lakes that were fished this week on the chain were Little Lake Down, Lake Down, Lake Chase, Lake Tibet and Lake Sheen.

Florida Large Mouth Bass Description - The largemouth is the largest member of the sunfish family. It generally has light greenish to brownish sides with a dark lateral line which tends to break into blotches towards the tail. Often … END_OF_DOCUMENT_TOKEN_TO_BE_REPLACED

Lake Toho in Central Florida Located adjacent to the City of Kissimmee in Central Florida. The 18,810-acre West Lake Tohopekaliga has long boasted a reputation among both … END_OF_DOCUMENT_TOKEN_TO_BE_REPLACED

Butler Chain of Lakes in Orlando Florida Butler Chain of lakes in order... 1.Lake Down is the northern-most lake in the Butler Chain with 872 acres of Fish-able clear water. Public Access is located … END_OF_DOCUMENT_TOKEN_TO_BE_REPLACED

Lake George Fishing The history of Lake George fishing dates all the way back to World War II. There’s even a bombing range on the lake that was operated by the US Military in Ocala National … END_OF_DOCUMENT_TOKEN_TO_BE_REPLACED