The month of May has seen some very good bass fishing action. Butler Chain has been producing some quality bass with a good majority of them coming from either under docks or the outside edges of the docks. Whacky rigged Gitem KO’s have been the best way to catch them under the docks, the slower fall of this bait helps keep it in the strike zone just long enough for the bass to hit it.
Working grass beds with the Gitem Curly 7’s and Curly 10’s has produced some more good bass for us, with the main lakes that have produced for us having been Lakes Tibet, Chase, Blanche and Sheen. 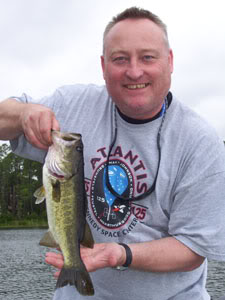 Johns Lake is still fishing the same and still one of my favorite lakes to fish. Some early morning top water action can be worked as long as you arrive early enough. Generally as the sun starts coming down the cut, the activity starts to pick up, first half of the month the top water bite was a quick bite in this area, usually lasting about a half an hour. From there we have generally worked the main body of water out in the middle working the Steel Shad and picking off some good bass.
This month has brought us a ton of rain, which was badly needed, water levels have been coming up very nicely on both Johns Lake and Butler Chain, this will change patterns some as the bass now have new areas to roam for food with some fresh vegetation now in the waters, we have been picking more bass off in much shallower waters due to this. Any shade of a watermelon color has been the main producing color as well as the Gitem Red Bass, if you have these colors on your boat, your sure to catch some bass. 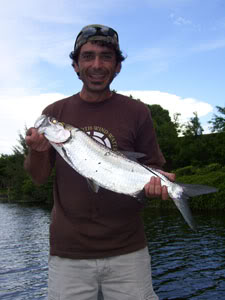 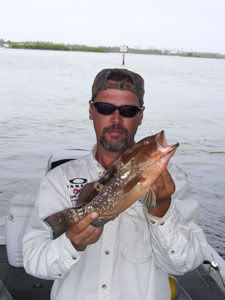 We added a new twist to the fishing arsenal the last few days by getting back into saltwater fishing again. For years I did a lot of saltwater fishing but strayed away with my main focus staying on bass fishing, with the summer months now upon us, the saltwater fishing has been picking up very nicely and we have been catching a lot of good fish.
We just got back from 4 days down in Miami doing a combination of things, part one of our trip was to target some peacock bass, although they did not play very well for us, due mainly to constant rain, we did manage to catch some good one. Best part was when I had my best friend Erik out on the boat and in the same body of water, he not only caught his first ever Peacock Bass, but he also boated his first ever Jack, and the kicker fish was his first ever Tarpon! I think this will be a trip Erik will talk about for years. This was all done on canals around the Miami Airport.

From there we headed to Biscayne Bay and what a blast we had, catching a bunch of Jacks, snappers and I landed a nice red grouper. We spent a lot of time fishing bridges and grass flats, as the weather did not allow us to venture thru the cuts or around the cuts to the Atlantic Ocean as storms offshore kept the waters churned up just a little too much. 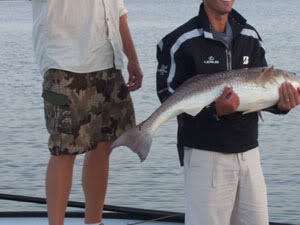 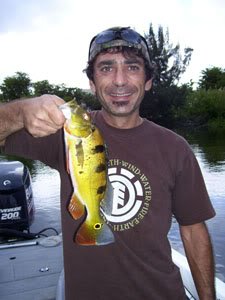 The next few months as summer heats up for us, we still fully expect a good bass fishing season and will be mixing in some saltwater runs for some more bull reds like Charles caught while we filmed a show for Reel Fishing, Charles managed to catch two bull reds, one on his first cast, again, it was another first, as Charles had never caught a redfish before, and he ended up catching two, one just over 40 inches and the other was I believe 35 inches.
I want to thank two of my main sponsors, Gitem Bait and Deep South Fishing Rods, the combination of these two companies have made my job a lot easier supplying me with quality baits and rods, please check them out, you will be very impressed with the quality and pricing.

Florida Large Mouth Bass Description - The largemouth is the largest member of the sunfish family. It generally has light greenish to brownish sides with a dark lateral line which tends to break into blotches towards the tail. Often … END_OF_DOCUMENT_TOKEN_TO_BE_REPLACED

Lake Toho in Central Florida Located adjacent to the City of Kissimmee in Central Florida. The 18,810-acre West Lake Tohopekaliga has long boasted a reputation among both … END_OF_DOCUMENT_TOKEN_TO_BE_REPLACED

Butler Chain of Lakes in Orlando Florida Butler Chain of lakes in order... 1.Lake Down is the northern-most lake in the Butler Chain with 872 acres of Fish-able clear water. Public Access is located … END_OF_DOCUMENT_TOKEN_TO_BE_REPLACED

Lake George Fishing The history of Lake George fishing dates all the way back to World War II. There’s even a bombing range on the lake that was operated by the US Military in Ocala National … END_OF_DOCUMENT_TOKEN_TO_BE_REPLACED