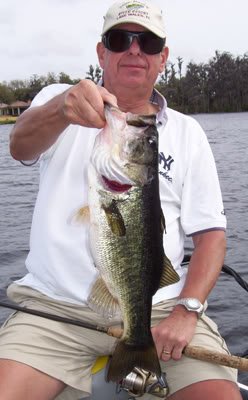 The month of March has seen some great trips out on Johns Lake. For the most part, schooling activity has been great up until the 13th when they just seemed to disappear. We are still having great success using Steel Shads in gold or silver color to catch not only schooling bass, but also bass in deeper waters in the middle of the main lake. One ounce Sugoi spinner baits have worked great around scattered grass patches and around areas with hydrilla and lily pads. When the bass have been schooling, these heavier spinner baits have been great at getting below the smaller schoolers where the quality bass lay.

Once the schooling action ends, junebug trick worms with red, green, or blue fleck with a small bullet weight worked around isolated grass patches have been key to catching the bass. Work the patches very good, to the point if you see one blade of grass, throw to it, as they have been holding bass. For the most part, the bite has been good, but the strikes have not been aggressive ones, you really have to watch your line, as several bass we had to let them swim with the trick worms a few seconds before being able to get a solid hooked.

We have not had too much success with bass around docks, but several of the areas with brush have produced as of late, fire tiger Fat A’s worked around these trees have caught several good solid bass, and made for a fun fight trying to keep them out of the wood after hook up. Deer Island cut has been a good area to work a split shot rig with a trick worm. Main focus has been in waters 4 to 8 feet of water and key in on bird activity, circling or diving birds will guide you to some good fishing action.

Florida Large Mouth Bass Description - The largemouth is the largest member of the sunfish family. It generally has light greenish to brownish sides with a dark lateral line which tends to break into blotches towards the tail. Often … END_OF_DOCUMENT_TOKEN_TO_BE_REPLACED

Lake Toho in Central Florida Located adjacent to the City of Kissimmee in Central Florida. The 18,810-acre West Lake Tohopekaliga has long boasted a reputation among both … END_OF_DOCUMENT_TOKEN_TO_BE_REPLACED

Butler Chain of Lakes in Orlando Florida Butler Chain of lakes in order... 1.Lake Down is the northern-most lake in the Butler Chain with 872 acres of Fish-able clear water. Public Access is located … END_OF_DOCUMENT_TOKEN_TO_BE_REPLACED

Lake George Fishing The history of Lake George fishing dates all the way back to World War II. There’s even a bombing range on the lake that was operated by the US Military in Ocala National … END_OF_DOCUMENT_TOKEN_TO_BE_REPLACED