Fishburne’s back in action for the Bassmaster Classic 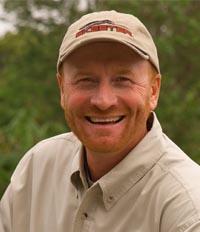 It had only been a few months after Claude “Fish” Fishburne and ESPN-BASS parted ways in 2004 when we bumped into each other at the 2005 Bassmaster Classic in Pittsburgh, a challenging tournament on the water bolstered by a well-attended outdoors show at the city’s stunning riverside convention center.

Fishburne was moving through the crowd at the show, glad-handing, smiling, signing autographs and greeting fans. We chatted for a few moments and he said he was doing well. But the disappointment and hurt was obvious. After six years as the emcee at BASS tournaments during the most recent gravy days before the industry’s current economic woes, the once-titled “Clown Prince of Fishing” (or something like that) found himself on the outside of the circuit he competed on for 12 years.

Fishburne said he’d bounce back. He had connections in the industry, sponsorships with a few companies and a positive vibe that touched fans young and old. Goofy and wise-cracking at times, and sometimes pushing the “Don’t go there” buttons of anglers on stage, he was a popular ambassador whose platform had been disrupted after contract discussions turned sour.

A month from now at the Bassmaster Classic in Birmingham, Fishburne will take the stage again during the three weigh-ins at the Birmingham Jefferson Convention Complex at bass fishing’s oldest and, some will argue, most prestigious event. Fishburne will be providing reporting, analysis and his unique wit to the festivities along with appearances at the outdoors show in the adjacent exhibition hall.

For all the arrows flung at BASS over the years for some of its questionable decisions – and it, like the FLW Tour, has had some head-scratchers – Fishburne’s return is a good move. He brings a vitality and fun nature to the ceremony, a dash of irreverence at times mixed with his knowledge of the sport.

“I want to make it happy and fun and exciting,” Fishburne said. “I want to help create a good time for everyone there – whether I’m, say, in the stands talking with fans, or backstage interviewing an angler waiting to weigh in, or on the outdoor show floor.”

Fishing for “Team Grandma” during his 12-year career, an homage to his loving and supportive grandmother, Kathryn Rounsaville of Canton, Ga., Fishburne competed in 108 tournaments. He won two of them, including a MegaBucks “hole course” event, and qualified for four Bassmaster Classics.

Fishburne’s free spirit didn’t stop once he was on the water. He clashed at times with former Bassmaster tournament director Dewey Kendrick, whose no-nonsense demeanor played like Sgt. Carter to Fishburne’s Gomer Pyle. If Kendrick could have put Fishburne on the shore peeling potatoes with a worn-out pocket knife, he’d probably have done it a time or two.

During one event, there was no question about who was lobbing water balloons at other competitors in the bay before takeoff. At the MegaBucks he won, Fishburne told BASS officials he didn’t have much weight in his catch as they checked anglers in the final day boat line. They would pull three or four of the guys with the most weight to the end of the line to create a little drama for the fans. But when Fishburne, in the middle of the pack, happily yanked out what proved to be the winning catch to show the crowd, the drama circled the drain like a slimy hairball.

Fishburne carried that fun-loving attitude to the weigh-in stage as emcee, joking and poking anglers waiting on the scale to settle. Sometimes they didn’t appreciate the jab. But they couldn’t overlook his knowledge and experience from his tournament days, which he deftly used to ask specific questions to elicit good information during their brief appearance on stage. If the bite was tough, Fishburne had an idea of what they were doing. If the bite was on fire, he rolled with them as they explained how the bass leaped in the livewell and slammed the lids.

Keith Alan will continue to handle the emcee duties for the weigh-ins at the Classic, joined by tournament director Trip Weldon and former two-time Classic champion Hank Parker. Three dudes with microphones (Weldon is busy watching weighs, you know) may seem like overkill. But it should mesh well at one of the most popular venues for the Classic in a state as crazy about bass fishing as it is about college football, relatively speaking.

Fishburne was on stage at the 2002 Classic in Birmingham and said this year “will feel like a homecoming.” The fans, many of whom for years on Internet message boards have expressed a desire for Fishburne’s return, will get their wish.

Perhaps whatever wounds existed years ago have healed. Time, it is said, does a good job of helping in that regard. The outdoors industry, like others, can be frustrating and painful at times. The roller-coaster ride from the peak to the valley isn’t always a scream of heart-throbbing exhilaration.

Whether he returns for future events is unknown at this point, but having Fishburne back for the Classic next month is a good start. We’re glad to see it, and will be on the lookout for incoming water balloons.

Florida Large Mouth Bass Description - The largemouth is the largest member of the sunfish family. It generally has light greenish to brownish sides with a dark lateral line which tends to break into blotches towards the tail. Often … END_OF_DOCUMENT_TOKEN_TO_BE_REPLACED

Lake Toho in Central Florida Located adjacent to the City of Kissimmee in Central Florida. The 18,810-acre West Lake Tohopekaliga has long boasted a reputation among both … END_OF_DOCUMENT_TOKEN_TO_BE_REPLACED

Butler Chain of Lakes in Orlando Florida Butler Chain of lakes in order... 1.Lake Down is the northern-most lake in the Butler Chain with 872 acres of Fish-able clear water. Public Access is located … END_OF_DOCUMENT_TOKEN_TO_BE_REPLACED

Lake George Fishing The history of Lake George fishing dates all the way back to World War II. There’s even a bombing range on the lake that was operated by the US Military in Ocala National … END_OF_DOCUMENT_TOKEN_TO_BE_REPLACED