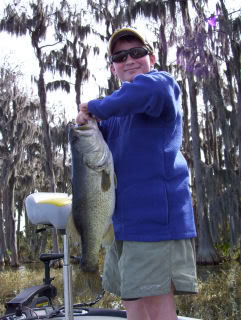 The last 2 weeks saw us on Butler Chain for 12 days with a mix of trips, a few trips with live bait and a few with all artificial trips. Start of the week saw for some very tough bite as the water temps had an almost 8 degree drop, which really had the bass on a serious case of lock jaw. Gitem Shads with a small bullet weight worked in and along grass beds worked very slow, and I stress VERY slow in order to get the bites.

Mid week saw the bite pick up as the water temps started reaching the upper 60’s and bass started heading to the beds, with several bass in the 5 and 6 pound class being caught in and around the beds. Once again it was Gitem Shads and 10 inch black neon worms getting the bass to bite with an occasional bass being caught on all white spinner baits. 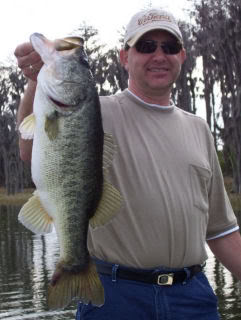 The shiner bite is still going strong on several lakes on the chain, with a few lakes actually having a drop off with the live bait bite. Two very memorable trips involved two youngsters, first was Edward fishing with his father, we had spotted a buck on a bed, and decided to give Edward a crack at catching this bass, with 4 flips of the shiner to the bass, she would not touch it, so the 5th try, the buck had knocked the shiner off the bed, and at that moment, the female came flying out of the grasses and nailed the shiner and the fight was on. Edward had worked this bass perfect and landed a beautiful 5.4 pound bass.

The second was with 7 year old Nick and his dad Greg. Greg had a bass boil up on his bait twice, but she would not commit to it, when Nick got his bait up there, and in a split second, this bass hit his shiner like a freight train. Nick set the hook and the bass headed straight into the grasses and with a little effort, Nick got her out of the grass, and off to the docks she went, after a brief battle, Nick had a beautiful bass, 22 inches long with a 15 inch girth, weighing in at 6.05 pounds, perfect enough to get his Youth Angler Certification from the State of Florida.

With the weather holding steady, and a consistent air temp, the waters have been warming up slowly, which will mean one thing, bass will be really hitting the beds and the bigger gals will start being caught. Several lakes on the Butler Chain are loaded with beds, most have been empty the last few weeks, so they should be showing up any day now. One consistent pattern has been, even though the bass were not on the beds, they have been holding up very close to them with the bucks right there.

Web site has been updated with all new pictures in the Photo Gallery and new video links on the main page, along with new testimonials.

Florida Large Mouth Bass Description - The largemouth is the largest member of the sunfish family. It generally has light greenish to brownish sides with a dark lateral line which tends to break into blotches towards the tail. Often … END_OF_DOCUMENT_TOKEN_TO_BE_REPLACED

Lake Toho in Central Florida Located adjacent to the City of Kissimmee in Central Florida. The 18,810-acre West Lake Tohopekaliga has long boasted a reputation among both … END_OF_DOCUMENT_TOKEN_TO_BE_REPLACED

Butler Chain of Lakes in Orlando Florida Butler Chain of lakes in order... 1.Lake Down is the northern-most lake in the Butler Chain with 872 acres of Fish-able clear water. Public Access is located … END_OF_DOCUMENT_TOKEN_TO_BE_REPLACED

Lake George Fishing The history of Lake George fishing dates all the way back to World War II. There’s even a bombing range on the lake that was operated by the US Military in Ocala National … END_OF_DOCUMENT_TOKEN_TO_BE_REPLACED