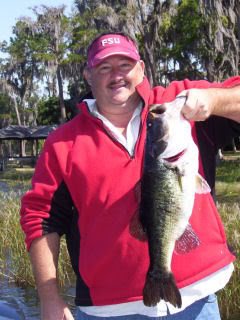 The past 2 weeks have seen some good bass fishing action out on Butler Chain. Starting with the Patterson clan, with shiners and artificial baits we worked Lake Butler and Lake Chase, with Steve tossing a spinner bait to get the “wildest” hook set award of the year. Steve was tossing a spinner bait in and around grasses and docks, when he gave her a toss to a dock, spinner bait going over the dock walkway, back into the water around a PVC pipe sticking up and under a boat. Thinking this was going to be a mess, he was right, as he tried to shake the lure loose, the line got pinned between a post and the walkway, when it looked like the rod got tugged on.

Steve assured me there was nothing there, and as he popped the line to shake her loose, we hear a splash from under the boat in the boat slip, Steve popped the line free from the walkway and the short lived fight was on. Stepping onto the dock, Steve had reeled up as far as he could, while I was hanging off the walkway, reaching for a bass that was not only hooked up solid, but was also tangled in someone else’s braided line left behind, after a few minutes of me teetering on sliding off a dock into the water, I did manage to just barely lip his bass, which weighed in right at 5 pounds. I honestly can’t remember the last time I had to work that hard to lip a bass.

The next day, Tuesday the 10th, saw Dave Fonder and his girlfriend back out on Butler, giving it a go with some fly fishing! Well needless to say, they gave it one heck of a go, before sitting down the fly rods and tossing around Steel Shads in the deep holes and drop offs to catch their bass.

Wednesday, Rod, coming from Canada gave it a run out on Butler with shiners and had a pretty darn good 4 hour trip, catching some good quality bass on Lake Butler and Lake Chase. Once again bass were caught in the areas where there was a deep water drop off close by, boat set up in 6 foot of water, and the bass coming from waters in 10 to 16 foot.

I have been enjoying the last few days off, still hitting the waters working with new lures. I have been catching bass out on Butler using a ChugRoller and a PopRoller with today being capped off with a nice 3.4 pound bass on a PT Spoon from High Roller Lures. 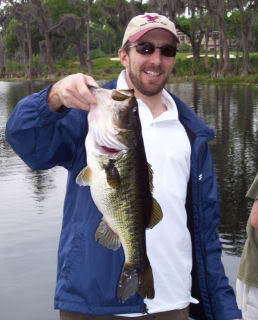 This past week has been yet another very busy week, with some very good and solid bass being caught on everything from live bait to artificial lures. With the bass spawn all but over, bass have moved for the most part away from shallow waters and have staged more towards deeper waters, close to drop offs. There has on some days been some very good schooling activity going on, some days the schooling bass will just hammer the live bait, while other days they seem to prefer t-rigged worms with a small screw in bullet weight.

Monday started the week off with Ken and Chris hitting Butler Chain with some live bait action. Lake Butler and Lake Chase were the definite lakes for the best bass action as these two guys caught some good quality bass with some very aggressive hits as the bass were doing some good schooling action in the cuts. The better quality bass where caught just off the grass bed edges with Chris getting the big bass of the day just shy of 5 pounds.

Kurt fished on Wednesday working nothing but artificial bait. With a high sun and no cloud cover to speak of, we spent a lot of time pounding grass beds, Kurts first hook up was on Lake Butler, using a High Roller PopRoller in Blue Shad color. From there it was a lot of slow worming using purple and black Christmas colored worms, with one other bass coming on a Yozuri Rattlin Vibe.

Some bass are still being caught in less than 3 foot of water, but main areas of focus have been in the 4 to 6 foot range with deep water drop offs close by. Rob from Fish-Hawk.net came down to fish Thursday with his brother and father to catch some Florida bass and the blue bird skies and minimal breeze did make things pretty tough on the guys, but being very persistent the guys did manage some good bass, with the two biggest looking like twins, one weighing in at 4.14 and the other coming in at 4.13 pounds on the digital scale.

Friday saw Sam and his son out on Butler Chain, this youngster was very impressive with his casting skills, working bait casters like a true pro, starting the day out catching the first bass in the first 10 minutes working a spinner bait thru the grass beds on Lake Butler before switching up to the worms and catching several more. Sam kinda hung out on the back of the boat and had a blast watching his son fish, and even had his son coaching him on where to toss his lures, with his dad getting a good bass on a rattlin vibe out of the deep waters on Butler. Weather was better today, with what should be our last cold front. Very minimal schooling activity was seen on the lakes that we fished today, but it’s only a matter of time before the waters start to really heat up with what will be a great top water bite.

Saturday I ended the week with Alan and his son out on Butler Chain for a 6 hour live bait trip. Alan is a local guy that wanted to hit Butler as he said he had little luck out there. We started out the day VERY cold for this time of year, water temps were down to 71 to start the day, with strong and cold winds. This was the perfect day for lock jaw, and the bass were very tough to catch as expected. Starting out on Butler and working grass line and thru the cut, Alan missed a few hook up, with his son landing 2 nice bass and having a beauty come unbuttoned as she danced on the water. From there we moved over into Lake Chase, I did spot some schooling action but no takers as we slow trolled along the grass beds, when Alan tossed his bait out, the second it hit the water it was hammered and the fight was on, with Alan landing a beauty of a bass coming in at 6.3 pounds on the digital scale. Happy Birthday Alan!!

In all the week saw some very good and solid bass being caught, with this front that is moving thru right now, water should hold to the mid 70’s for the better part of the week and that should help kick in some good top water action. Hope everyone has a safe and Happy Easter.

Florida Large Mouth Bass Description - The largemouth is the largest member of the sunfish family. It generally has light greenish to brownish sides with a dark lateral line which tends to break into blotches towards the tail. Often … END_OF_DOCUMENT_TOKEN_TO_BE_REPLACED

Lake Toho in Central Florida Located adjacent to the City of Kissimmee in Central Florida. The 18,810-acre West Lake Tohopekaliga has long boasted a reputation among both … END_OF_DOCUMENT_TOKEN_TO_BE_REPLACED

Butler Chain of Lakes in Orlando Florida Butler Chain of lakes in order... 1.Lake Down is the northern-most lake in the Butler Chain with 872 acres of Fish-able clear water. Public Access is located … END_OF_DOCUMENT_TOKEN_TO_BE_REPLACED

Lake George Fishing The history of Lake George fishing dates all the way back to World War II. There’s even a bombing range on the lake that was operated by the US Military in Ocala National … END_OF_DOCUMENT_TOKEN_TO_BE_REPLACED