“The General” selected for winning name in big bass contest 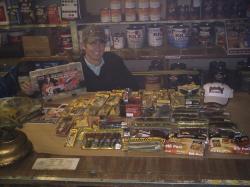 A 16-pound, 15-ounce largemouth bass discovered in October during a routine electro-fishing procedure at Brown’s Creek Lake in rural Henderson County, Tenn., has been officially dubbed “The General” in a Name That Bass Contest posted on Outdoors with Larry Rea’s web site, www.lroutdoors.com.

Will Garey, 24, of Atoka, Tenn., came up with the winning name. The General was among three finalists in the contest, which was featured throughout November on the Outdoors with Larry Rea radio show, which is in its eighth year on the air on Country Legends WMC 79 in Memphis. More than 30 names were submitted by show listeners during November. The show is broadcast on Saturday mornings from 6-7:30 a.m., CST.

A panel of judges trimmed the original list to The General, Granny Brown (Ron Wong of Memphis) and Shockey (Regina Owen of Memphis) with the winning name selected in a vote of show listeners on Dec. 5.

“I’ve never seen so much stuff (prizes),” said Will’s dad, Bart, whose family has owned and operated one of Memphis’ oldest retail outlets, the Hollywood Furniture & Hardware Company, which has been in business for 85 years at 2461 Chelsea Avenue.

Yes, the fish is a female, but according to the U.S. Army’s web site (www.army.mil) women can serve in 93 percent of Army occupations and they make up about 15 percent of the active Army. In fact, on June 11, 1970, Colonel Anna Mae Hays, Chief, Army Nurse Corps was promoted to the grade of brigadier general, thus becoming the first woman in the history of the U.S. Army to attain general officer rank. In November 2008, Ann E. Dunwoody made history when she became the first woman in the U.S. military to attain the rank of four-star general.

The Tennessee Wildlife Resources Agency discovered “The General” on Oct. 21 at Brown’s Creek, a state-managed 167-acre lake located in Natchez Trace State Park. The big fish was examined and then released back into the lake where since its discovery has created a frenzy of activity by anglers.

Dave Rizzuto, TWRA Region 1 fisheries biologist, says “The General” is going to get even bigger, possibly topping 18 pounds as she fattens up during January and February. The existing state record for largemouth bass is 14 pounds 8 ounces caught in Sugar Creek in Lawrence County in 1954. It is the state’s oldest state fisheries record.

Among other names considered by the panel of judges were Gilda (Rodney Owen of Memphis), Miss Daisy (Calvin Jones of Memphis), Elvis (Nichol Treuil of Memphis), Lucille (Brian Carroll of Smyrna, Ga.), Lucky (Steve McGoldrick of Memphis), Shamuno (Gil Lackey of Nashville), Mr. T. (Edward Farrell of Memphis), George (Jo Ann Lynch of Memphis), Gertrude (Angela Lusk of Memphis) and It Ought to Be Mine (Les Collier of Lakeland).

Florida Large Mouth Bass Description - The largemouth is the largest member of the sunfish family. It generally has light greenish to brownish sides with a dark lateral line which tends to break into blotches towards the tail. Often … END_OF_DOCUMENT_TOKEN_TO_BE_REPLACED

Lake Toho in Central Florida Located adjacent to the City of Kissimmee in Central Florida. The 18,810-acre West Lake Tohopekaliga has long boasted a reputation among both … END_OF_DOCUMENT_TOKEN_TO_BE_REPLACED

Butler Chain of Lakes in Orlando Florida Butler Chain of lakes in order... 1.Lake Down is the northern-most lake in the Butler Chain with 872 acres of Fish-able clear water. Public Access is located … END_OF_DOCUMENT_TOKEN_TO_BE_REPLACED

Lake George Fishing The history of Lake George fishing dates all the way back to World War II. There’s even a bombing range on the lake that was operated by the US Military in Ocala National … END_OF_DOCUMENT_TOKEN_TO_BE_REPLACED