The middle of September has seen some awesome bass fishing action. We have been working mainly the Kissimmee Chain of Lakes to include world famous Lake Toho, as well as East Lake Toho. The weather seems to have settled some as far as the heat, but I believe that has been mainly due to some breezy days on the water to help cut the heat back.

I will say this, the heat has not seemed to mess with the bite too much at all. Many will say once you hit 10am the bite is shut down and it becomes a one here one there kind of thing, But don’t tell Jimmie and Frankie that. These two guys had what can be called nothing but an awesome time on the water. 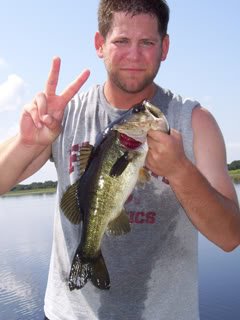 We had set our sites on the Kissimmee Chain of Lakes, which holds some of the best bass fishing around right now, and the waters did not let them down. Jimmie started the day out in our first spot, hitting a smaller, maybe 2 pound bass in the first 5 minutes, using wild shiners. This was the first ever bass that Jimmie had caught, which I was not aware of at the time. We made one move to an area that has been holding quality bass for some time now, and it was game on. Jimmie landed a very solid 4 pound bass, that fought awesome, no jumping with this gal, she just kept diving to bottom and charging the motor, but Jimmie worked her like a champ and got her in the boat, talk about big smiles for this bass he landed, we also managed to get her on film, so be sure to check out the Bass Fishing Videos on my web site.

Frankie, The host for Reel Fishing, had started out the day working artificial lures, but when he saw Jimmie was catching them left and right, decided to switch up to the wild shiners and started catching a few himself. These two guys were a total riot to have out on the water. Non stop catching and the jokes were just flying around. 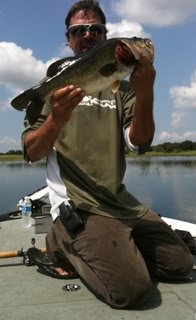 The guys wanted me to fish along with them, so I joined them buy tossing around a wacky rigged Strike King Shim E Stick and caught a nice 4 pounder and showed Frankie how to use the Strike King Red Eye Shad, 3 casts into showing him, they grabbed the camera and started filming as what turned out to be a nice 5 pounder slammed the baits and started to dance around.

These bass were being caught all the way to 11am, in the heat of the day in shallow waters. The guys had a great time on the water and ended up catching 22 bass and learned a lot about bass fishing in Florida. Looking forward to getting them back out there very soon for some more great action.

Florida Large Mouth Bass Description - The largemouth is the largest member of the sunfish family. It generally has light greenish to brownish sides with a dark lateral line which tends to break into blotches towards the tail. Often … END_OF_DOCUMENT_TOKEN_TO_BE_REPLACED

Lake Toho in Central Florida Located adjacent to the City of Kissimmee in Central Florida. The 18,810-acre West Lake Tohopekaliga has long boasted a reputation among both … END_OF_DOCUMENT_TOKEN_TO_BE_REPLACED

Butler Chain of Lakes in Orlando Florida Butler Chain of lakes in order... 1.Lake Down is the northern-most lake in the Butler Chain with 872 acres of Fish-able clear water. Public Access is located … END_OF_DOCUMENT_TOKEN_TO_BE_REPLACED

Lake George Fishing The history of Lake George fishing dates all the way back to World War II. There’s even a bombing range on the lake that was operated by the US Military in Ocala National … END_OF_DOCUMENT_TOKEN_TO_BE_REPLACED