The month of May has seen some very good bass fishing action in Orlando. For the most part Johns Lake has been the place to be. Even though we have seen very limited schooling action in the mornings, we have caught some good schooling bass in the cuts, mainly Deer Island cut. Bass have been hitting on Gitem Warlocks around isolated grass patches, rigged with a very small bullet weight and worked very slowly.

Several areas in mid lake with hydrilla have been producing some quality bass using 1 ounce Sugoi spinner baits, Steel Shads and 10 inch worms. Several days of higher winds than normal had us working docks that were wind blown, which had been holding bass, some docks producing as many as 3 bass, which makes for a very good day.
Live bait has been producing ok, but we have been out catching live bait with artificial baits sometimes 3 to 1, clients really love this, as it is just that much more fun to catch bass using plastics.

Butler Chain has been fishing pretty good. Lakes we have worked have been Butler, Chase and Blanche. Butler has been a great lake to start the day out early on in the mornings, from there moving over to Lake Chase has been the ticket. Numbers and bigger bass have come later in the day on Lake Blanche, working the docks and the deeper drop offs very slow worming. Altho the bite has been what we call a “small tick” instead of the aggressive hits, quality bass have been caught.

For the most part, water levels on Johns Lake and Butler Chain are not too bad, Johns Lake, we do have a few sand bars to watch out for, one right at the ramp area, one coming off the point going into the main lake area, and one going into the Horse shoe area. Butler Chain the canals could use some water, but the levels are still safe to pass thru, and with the rains the last few days, should help out with those levels. 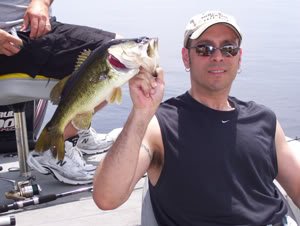 My tournament partner and I did venture out to Harris Chain mid month to fish a Fishers Of Men Tournament, with no free time to practice out there, we went according to old notes from years past and they paid off pretty good. With some tough fishing, we did get into some schooling bass, but we could only get them to hit very small floating Ugly Duckling crank baits, once we had our limit, we switched up to one ounce spinner baits and covered a lot of water to cull some smaller bass, with a nice 5 and change bass slamming a spinner bait, landing us in 11th place, just 2 spots from the money, which equaled out to a pound, also missing second big bass by a matter of ounces.

Waters at the ramp on Harris were very low, with only one of the ramps open, and apparently a boulder sitting at the end of the ramp making launching and pulling out entertaining to say the least. Next months tournament is State Championships on Lake Rousseau and from there we go to Southeast Regional’s the end of October, site still to be determined.

Florida Large Mouth Bass Description - The largemouth is the largest member of the sunfish family. It generally has light greenish to brownish sides with a dark lateral line which tends to break into blotches towards the tail. Often … END_OF_DOCUMENT_TOKEN_TO_BE_REPLACED

Lake Toho in Central Florida Located adjacent to the City of Kissimmee in Central Florida. The 18,810-acre West Lake Tohopekaliga has long boasted a reputation among both … END_OF_DOCUMENT_TOKEN_TO_BE_REPLACED

Butler Chain of Lakes in Orlando Florida Butler Chain of lakes in order... 1.Lake Down is the northern-most lake in the Butler Chain with 872 acres of Fish-able clear water. Public Access is located … END_OF_DOCUMENT_TOKEN_TO_BE_REPLACED

Lake George Fishing The history of Lake George fishing dates all the way back to World War II. There’s even a bombing range on the lake that was operated by the US Military in Ocala National … END_OF_DOCUMENT_TOKEN_TO_BE_REPLACED