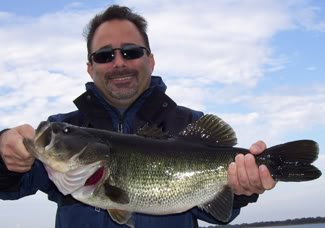 Ari and Karl fished 6 hours out on Lake Jackson with me on Sunday and had a pretty darn good day. I believe final numbers were 16 bass boated and a few others missed. Bait of choice was wild shiners and it was a good choice for sure. The guys boated a couple bass that went three to four pounds with the big gal coming in just over six pounds.

Weather was great with a fair amount of wind, but was not bad at all as the day warmed up and the Dig in Anchor held the boat in place perfectly. Bass were relating heavily to structure, and that structure was sunken trees, if you tossed five feet short, you waited awhile for a hit, or didn’t even get one. Big key was placing it very close to the trees and let the wild shiners swim along them on a float set about a foot deep. For the most part the bite was not aggressive as it typically has been, this day the bass would mouth the bait and swim some before it would really commit to it. 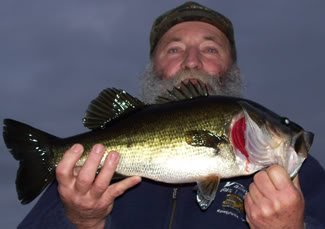 This required patience on our part where it seemed at times we were letting them have the bait for twenty seconds before we could set the hook, and with the circle hooks they were set perfect right in the corner of the mouth like they should be. The guys did a great job out there and we all had a blast.

What can I say folks, with wild shiners in tow the Polley father and son team banged some serious bass out on Lake Jackson. They come down from Canada and Dan gave his dad a Christmas present of Florida Bass Fishing. The bass definitely did not let these two guys down as we had a steady bite all day long. 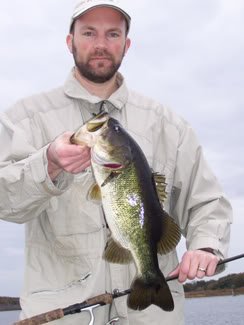 For the most part the bass were slow to commit to our offerings of wild shiners, just mouthing the baits and swimming some with them before really taking them. This meant patience once again on our part, but the guys got their hook ups and boated well over 20 bass for the day.

When the live bait ran out, we switched up to some artificial baits landing a few more bass, with several missed bass, as the bass we located were deep in the slop in very shallow water. We started the day out fishing in four to six foot of water with live bait, and ended it in under a foot of water, casting to basically just inches of water where the bass were chasing bait fish around.

The guys had a great day on the water and had a blast catching some great Florida largemouth bass. Nothing better than seeing a father son team enjoying some quality time on the water together.

Florida Large Mouth Bass Description - The largemouth is the largest member of the sunfish family. It generally has light greenish to brownish sides with a dark lateral line which tends to break into blotches towards the tail. Often … END_OF_DOCUMENT_TOKEN_TO_BE_REPLACED

Lake Toho in Central Florida Located adjacent to the City of Kissimmee in Central Florida. The 18,810-acre West Lake Tohopekaliga has long boasted a reputation among both … END_OF_DOCUMENT_TOKEN_TO_BE_REPLACED

Butler Chain of Lakes in Orlando Florida Butler Chain of lakes in order... 1.Lake Down is the northern-most lake in the Butler Chain with 872 acres of Fish-able clear water. Public Access is located … END_OF_DOCUMENT_TOKEN_TO_BE_REPLACED

Lake George Fishing The history of Lake George fishing dates all the way back to World War II. There’s even a bombing range on the lake that was operated by the US Military in Ocala National … END_OF_DOCUMENT_TOKEN_TO_BE_REPLACED