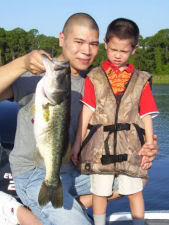 The past 2 weeks has seen some great bass fishing action on Butler Chain, and has seen 2 days, where the bass just did not want to play fairly. For the most part, the action on artificial baits has been producing not only good numbers, but good size as well.

Gitem baits K.O. has been the top producer over the last two weeks, rigged wacky and Texas, working in and along the grass beds. First part of the two weeks saw most of the action coming from Lakes Sheen, Tibet and Pocket. Grass beds and some docks produced several bass to 4.6 pounds, as we found the bass were not aggressively hitting the baits, but just picking them up and swimming towards the deeper drop offs. As the rains consistently dropped water on the lakes, they had started to muddy up, which towards the end of the two week period, saw us moving to works Lakes Down and Little Lake down.

The Bay, as well as Lakes Butler, Down and Little lake Down currently have the cleanest water on the chain, and some of the better fishing action, with some schooling action being spotted on several of them. Schooling action we have come across has usually been mid morning, from 9:30 till almost 10:30 with some good bass being caught off them.

The kids as of late have been the big bass catchers, and they have had a blast, with several of the youngsters catching bass on soft plastics and really showing some great skills, at not only casting their baits, but working them properly and setting a hook that would make a Pro proud of them.

Electronics have been a big key, as most of the good bass being caught are coming from deeper water, ranging from 9 to 23 feet deep. With the water temperatures starting the day out in the upper 80’s, deeper waters will be the big key to catching quality bass especially as the day heats up. Top water action has been very limited early in the mornings and the spinner bait bite has all but disappeared for us over the last two weeks.

Afternoon showers have been a blessing, helping maintain and slowly bringing water levels back up, just keep in mind, if you hear thunder, lightning is also there, so be safe, and hit the ramp until the storms pass. Most storms have been coming later in the day, from 2pm and on, so you can still get in a good days fishing before the storms hit.

Be safe and drink lots of water, and don’t forget the sun screen!!!

Florida Large Mouth Bass Description - The largemouth is the largest member of the sunfish family. It generally has light greenish to brownish sides with a dark lateral line which tends to break into blotches towards the tail. Often … END_OF_DOCUMENT_TOKEN_TO_BE_REPLACED

Lake Toho in Central Florida Located adjacent to the City of Kissimmee in Central Florida. The 18,810-acre West Lake Tohopekaliga has long boasted a reputation among both … END_OF_DOCUMENT_TOKEN_TO_BE_REPLACED

Butler Chain of Lakes in Orlando Florida Butler Chain of lakes in order... 1.Lake Down is the northern-most lake in the Butler Chain with 872 acres of Fish-able clear water. Public Access is located … END_OF_DOCUMENT_TOKEN_TO_BE_REPLACED

Lake George Fishing The history of Lake George fishing dates all the way back to World War II. There’s even a bombing range on the lake that was operated by the US Military in Ocala National … END_OF_DOCUMENT_TOKEN_TO_BE_REPLACED