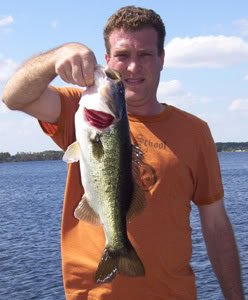 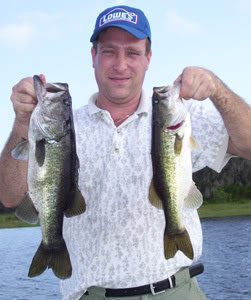 October has seen some good bass fishing action in Orlando. With trips on Butler Chain and Johns Lake the artificial bite has been doing pretty good. Johns Lake we had some limited early morning schooling action at the Deer Island Cut and some decent bass caught along the grass lines in the same area. After the schooling action stopped, we headed for areas with a mixture of grass and lily pads, getting several blow ups on toads and flukes swam across the pads, missing several but still getting our fair share. Most all the bass caught were in less than two foot of water and all, except for the schooling bass were holding tight to cover on Johns Lake.

Butler Chain we had seen some schooling action on lakes Pocket, Fish, and Tibet. Canal going into Fish Lake is still very shallow but you can make it in there. There is a grass island blocking most of the canal before the final bend to the lake, but we were able to get around it with no problem. Spinner baits and rattle traps were the ticket in Fish Lake, while toads and Gitem K.O.’s where catching the bass in Lakes Pocket and Tibet. Water surface temperatures were running in the low 80’s with most bass being caught in four to six foot of water. Some bass were caught in deeper waters slow rolling a spinner bait. Busy season is now upon us, and with very low water levels once again in south Florida, we are expecting yet another very busy season, so be sure to book your trips as soon as you can.

Florida Large Mouth Bass Description - The largemouth is the largest member of the sunfish family. It generally has light greenish to brownish sides with a dark lateral line which tends to break into blotches towards the tail. Often … END_OF_DOCUMENT_TOKEN_TO_BE_REPLACED

Lake Toho in Central Florida Located adjacent to the City of Kissimmee in Central Florida. The 18,810-acre West Lake Tohopekaliga has long boasted a reputation among both … END_OF_DOCUMENT_TOKEN_TO_BE_REPLACED

Butler Chain of Lakes in Orlando Florida Butler Chain of lakes in order... 1.Lake Down is the northern-most lake in the Butler Chain with 872 acres of Fish-able clear water. Public Access is located … END_OF_DOCUMENT_TOKEN_TO_BE_REPLACED

Lake George Fishing The history of Lake George fishing dates all the way back to World War II. There’s even a bombing range on the lake that was operated by the US Military in Ocala National … END_OF_DOCUMENT_TOKEN_TO_BE_REPLACED