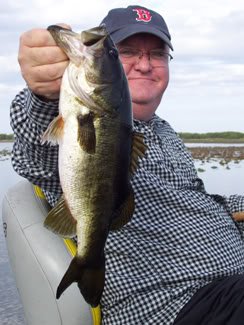 Central Florida Bass Fishing has been going strong this month. Most of our trips have been done on Lake Jackson as of late and this lake has been producing some great numbers of bass, as well as some pretty good sized bass. The lake was getting choked out pretty bad with the lily pads, almost to the point is was limiting the areas we could get to but with the spaying that was done, the pads are disappearing and has opened up a lot more areas to catch these trophy bass out here. 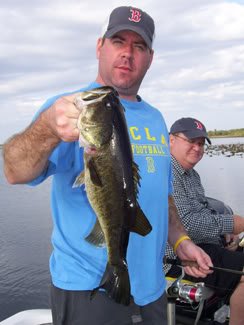 Artificial baits have been doing pretty good. Spinner baits and red eye shads have been getting some very nice quality bass out here. Some of the bass we have started to notice some sores on their under side, classic sign they are starting to fan some beds. We have also caught a few bass that showed signs of filling up with eggs. These bass are starting to get some good sized bellies to them.

Typical day out here, six to eight hour trip has been seeing us boat 20 to 30 bass using the artificial. The most productive artificial bait has been the zoom fluke. The two colors that have been producing the most bass has been june bug with green fleck and the watermelon red.

Live bait fishing out here has been nothing short of awesome. Although many don’t want to spend the usual twenty dollars a dozen for the live bait, we have been using some that has just been slaying the bass out here at a cost of only eight dollars a dozen. Much more cost effective for the angler, and catches the same bass that the high priced shiners catch. Trips with four dozen shiners have been seeing us use the shiners up catching 30 bass sometime in less than 3 hours with the bass ranging in size from two to six pounds. The spawn is just around the corner and it is shaping up to be yet another great bass fishing season.

Florida Large Mouth Bass Description - The largemouth is the largest member of the sunfish family. It generally has light greenish to brownish sides with a dark lateral line which tends to break into blotches towards the tail. Often … END_OF_DOCUMENT_TOKEN_TO_BE_REPLACED

Lake Toho in Central Florida Located adjacent to the City of Kissimmee in Central Florida. The 18,810-acre West Lake Tohopekaliga has long boasted a reputation among both … END_OF_DOCUMENT_TOKEN_TO_BE_REPLACED

Butler Chain of Lakes in Orlando Florida Butler Chain of lakes in order... 1.Lake Down is the northern-most lake in the Butler Chain with 872 acres of Fish-able clear water. Public Access is located … END_OF_DOCUMENT_TOKEN_TO_BE_REPLACED

Lake George Fishing The history of Lake George fishing dates all the way back to World War II. There’s even a bombing range on the lake that was operated by the US Military in Ocala National … END_OF_DOCUMENT_TOKEN_TO_BE_REPLACED