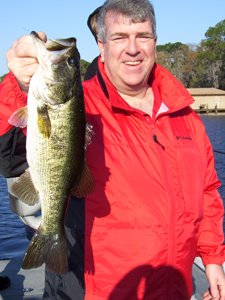 Mid March has seen some great bass fishing action. This stretch has been split up between Lake Toho and Butler Chain.

The trips have been a mix of live wild shiners as well as all artificial bait trips. Wild shiners have been either slow trolled of the back of the boat, in areas we know either hold bass, or are spawning areas. This has been a very lethal tactic to catching the bass, and is a lot less boring than just plunking an anchor out and sitting in one spot and “waiting” for bass to come to you. 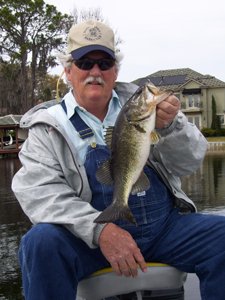 One very often overlooked tactic by many is as you slow troll some live bait off the back of the boat, you can also flip one into pot holes in the grasses or tight up against lily pads or reeds. All too often, this over looked option can keep the bass catching action going steady during the day.

Artificial trips have been yielding between 10 and 20 bass a day. Mostly off senko type baits and worms, but we have got some here lately on shallow running crank baits. Long A’s have been the best along with a few custom ones in bone color. For the most part, bass had seemed to be staging just off their spawning areas but have been moving in, with some really nice ones on beds, just seem to be a little spookier this year than in years past. Good polarized glasses are huge key to sneak up on the beds, along with a very silent approach. Just remember if you catch a bass from a bed, PLEASE handle her very carefully, take that picture and gently slide her right back in the water. My clients have all been loving the new Deep South Rods, these rods are light and a lot of backbone to them to really fight those bass. You can now order them direct from my web site, or call me to place your order.

Today I spent a few hours this morning running around the Conway Chain of Lakes. These lakes are very clean waters which dictates Mono or Fluorocarbon lines. I had pretty much spent most of the time on North Lake Conway up in deeper waters. Working top water baits and drop shot baits were a very good option. Drop shot was working good first thing in the morning set up over a 22 foot hole, as the bass were stacked up in it. All I had to do was drop the bait straight down and one little bounce and I had a hook up.

Schooling activity was very strong all morning long, and they were still schooling when I pulled off the water at 11am. Spooks and Speed Pencils were picking them off on the surface in waters running 9 to 20 feet deep. With all the fishing pressure on John’s Lake, this was a good switch. Good ramp on the chain to launch one boat at a time, and limited parking is the only draw back to this area. But the fishing was great which always makes up for any negatives.

Friday we had the Chapman clan out on John’s Lake for a couple hours of some great bass fishing action. Enjoying a few days of vacation from Scotland, the bass were very friendly and came out to play first thing this morning. Live bait was the bait of choice, and the Horseshoe area of the lake was the best option.

Bass were mainly holding in areas of slight drop offs and chasing the bait fish to the surface. Schooling activity was not as great as it had been, but there was plenty of action to keep these anglers more than happy. As has been the case since the dog days of summer has hit us full swing, the bite really drops off fast roughly around 11am.

Several descent bass fell prey to our baits today, with the big fish of the day coming in right at a very nice 10 pounds, only problem with this fish, it was a catfish!!!
We have a full moon cycle mid week next week, so we will be hitting John’s Lake and going after some night time bass.

Saturday the 12th we had a tournament out on Lake Kissimmee.
Things looked as if they were going to start out pretty good as we had a good breeze going , we started out launching out of Overstreet and headed south on Kissimmee towards Polluted Water Cove area. Working that area over for almost 2 hours without even getting a bite, I made the move to Hatchineha, which was the right choice.

Spent the next 2 hours flipping Gitem Shads in watermelon red picking up 3 fairly quick bass, with the small one being 4.06 pounds. Got the forth hook up of the day, as she picked up the bait, she made a move for the grass bed and I went to set the hook, just then she made a fast run towards the boat in mid hook set and got away, as she cruised by the boat I could see she was an easy 6 to 7 pounds, I knew this one would hurt.

I had spotted 2 others cruising the same grass bed, back just barely out of the water so I started flipping to them, when I saw the last thing I needed to see, four airboats, for some reason decided they wanted to buzz right thru the same grass bed I had been flipping, of course chasing away hopes of getting my limit from there. I managed 3 more shorts for the day, and weighed in just over 13 pounds for the 3 I had which was good enough for second place, the one that got away, did end up hurting, as she would have put me over the top and given me first place. That’s just the nature of the beast. Water are very low so be VERY careful navigating out there.

Today we had a half day run out on Butler Chain, with very little breeze to speak of and HOT as all get out, we knew from the get go, it was going to be a tough day. With the sun beating down on us hard the last several weeks, and little rain to speak of, the rains always seem to maneuver around us as of late, the waters are heating up fast, low 90’s by 11am, and that’s the water temp folks.

We hit several areas out on the chain today and worked hard for the bass we caught, morning bite we did mange a few smaller bass in 4 to 6 foot of water on Lake Butler, but here it seemed the pickerel wanted to play more than the bass, so we made a quick move over to Lake Louise, picking up a few more bass, with the biggest coming on our final move of the day, into Lake Isleworth.

The Mann Clan from Manchester England had what turned out to be a very good day on what proved to be tougher than normal fishing conditions, shiners were the definite way to go today. Local tournament out on the chain Saturday, from what we have heard, took only 7 pounds to win, now that’s some tough fishing, but pretty typical for this time of year. With the sporadic bite that has been going on as of late, the best pattern has seemed to be an every other day type of deal, if they are slow one day, you generally have a good day the second day.

Right now, the main focus has been, shallow first thing in the morning before the sun gets up, and then attacking the deeper holes, from 10 to 20 feet deep to get a descent limit. If you’re not using shiners, focus more toward the C-Rig or even a drop shot, and flipping the docks and grass beds. No schooling activity was spotted today, which is rare for this chain. Stay safe and drink A LOT of water.

Today I went on a scouting trip on Butler Chain. I have received a few e-mails from people asking where the bass are hiding and what they are hitting on. I started the day in Lake Louise, simple and basic pattern was running the edges tossing a Baby Bass colored KO from Gitem Baits. Working the shallow water grass beds in 4 to 6 foot and tossing directly at the cypress tress, and letting it fall to the base of the tree yielded 3 descent sized bass. The bite was real soft, as they seemed to pick up the baits and just hold onto it with moving so you really had to watch your line very closely.

I did stumble on 2 different schools in Lake Louise picking up another 12 on a Little George. Although the schooling fish are generally not very big in size, ranging from 1 ½ to 2 ½ pounds, I did manage a 3 pounder from one of the schools, always fun nailing schoolers though.

From there I made the move back into Lake Isleworth and started tossing the Gitem Drop, working it slowly along the grass edge with mixed in pads, picking up 4 more descent sized bass before calling it a day.

I did notice that the deep water bite had slowed down some for me, as this time of year I am usually getting them in 10 to 20 foot of water. Today they seemed to be suspended on the drop offs somewhat and always close to some type of cover or structure, the big key was to fish VERY slow and pay close attention to your line, and if you were around the grasses, watching for grass being moved around by fishing moving thru.

Today we hit John’s Lake for a few hours before putting the boat in lock down for the next 2 days until the storm passes by. Started out working the horseshoe area with Gitem Drops picking up a few scattered throughout the cut. Most were coming more from the center of the cut, with a few coming from along the grass edges. I did manage 2 on the Little George, instead of a typical retrieve, I would “pop” it and it would get hit on the fall.

Moving out to the main lake area, I worked A LOT of grass beds, most the beds which had a more scattered pattern to them, and worked the drop shot thru them. Seemed having the drop set at 2 feet was perfect for coming thru the scattered patches as it kept the bait in what definitely appeared to be the strike zone for the day. I ended the day finding some of the good “slop” consisting of heavy grasses and lily pads and worked a frog for about 45 minutes and managed to get one last bass for the day. Total for the day was 12 bass, and all ran right at 2 pounds each.

Florida Large Mouth Bass Description - The largemouth is the largest member of the sunfish family. It generally has light greenish to brownish sides with a dark lateral line which tends to break into blotches towards the tail. Often … END_OF_DOCUMENT_TOKEN_TO_BE_REPLACED

Lake Toho in Central Florida Located adjacent to the City of Kissimmee in Central Florida. The 18,810-acre West Lake Tohopekaliga has long boasted a reputation among both … END_OF_DOCUMENT_TOKEN_TO_BE_REPLACED

Butler Chain of Lakes in Orlando Florida Butler Chain of lakes in order... 1.Lake Down is the northern-most lake in the Butler Chain with 872 acres of Fish-able clear water. Public Access is located … END_OF_DOCUMENT_TOKEN_TO_BE_REPLACED

Lake George Fishing The history of Lake George fishing dates all the way back to World War II. There’s even a bombing range on the lake that was operated by the US Military in Ocala National … END_OF_DOCUMENT_TOKEN_TO_BE_REPLACED