Short video of us having some fun on Lake Toho early November 2009. We did a lot of wacky rigged Gitem K.O’s dipped in JJ’s Dippin Dye. This combination has proven to be lethal when it comes to catching bass.

We go through stretches where we seem to catch a ton of bass on a wacky rig. Typically we have our stick baits, or senko type baits Texas rigged, but when the bass are just mouthing the baits or giving it that slight tap but not taking it, we will wacky rig the bait and start catching them like crazy.

When we are wacky rigging we will normally use a 2/0 circle hook and hook the bait in the middle, this gives it a nice side to side fall and generally the bass will hit this bait on the fall, although we have had a few chase and strike the bait on the lift. This type or rigging is very effective when working the front line of grass beds and along rock walls like you see in this video. Yet another good one is skipping it under docks. Skipping this set up under docks has proven to be very effective, as it leaves the bait in perfect position as it falls slowly to where the bass may be hiding.

Looking to spice it up a little bit? We will at times dip it into a jar of JJ’s Dippin Dye, not only can we change colors or the bait but it will also add the garlic scent to the lure, this has also been a big key to that soft bite. This is also a good way to go after bedding bass during the spawn here in Florida. One of the best things about Florida Bass Fishing is catching those trophy bass during the spawn, and working a wacky rigged bait in front of a bass has triggered several aggressive strikes. Being able to watch the bait slowly fall in front of the bass and coming to rest, then just barely twitching the lure, just enough to make it move without pulling it away from the bass can and will drive that big gal crazy. 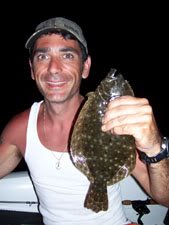 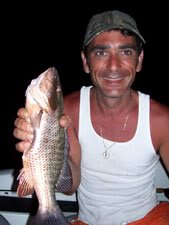 The switch up comes with us doing several saltwater trips which have been producing some great fishing action with us catching a wide range of species. Summer time has always been a great time for some serious saltwater fishing and as usual the fish have responded with every run to the coast. Port Canaveral has been one of our favorite areas to fish saltwater and our runs out there have been producing some good grey snapper, mutton snapper, blues, flounder a few trout and some slot redfish. 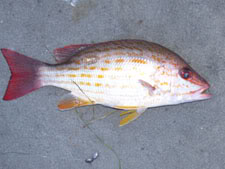 Live shrimp has been the main bait to keep the action steady and the rods bending, but the DOA Shrimp and the steel shad have had their moments out there catching the reds and the trout for us. Shrimp rigs we have been using a 1/0 circle hook with a split shot weight around docks and bridges to get our catch, with us catching between 30 and 40 per trip, this makes for a very good day of fishing.

If anyone is interested in saltwater trips, just send me an e-mail or call as this action will remain steady thru the rest of summer.

December has seen some great bass fishing action on Johns Lake, Butler Chain and the private waters we have been fishing. 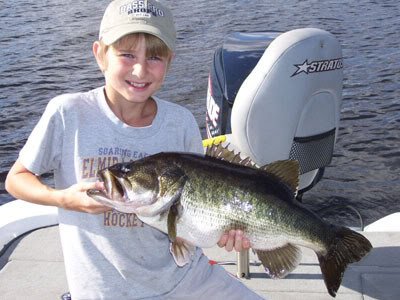 Private waters have mainly been for crappie fishing the past month, and it has been producing some very nice slabs. Bait we have been using have been the SteelShad and jigs tipped with crappie nibbles.

Most trips have been 4 hour trips with us boating between 20 and 30 per trip and they have been running from 1 ½ pounds to 2 pound slabs! 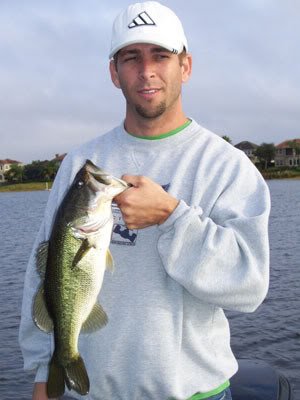 Johns Lake we have spotted bass beds all over the place! Its that time of year for the big gals to show their faces and make clients very happy, as was the case with a father and son trip of Bruce and young Dave. Bruce had been tossing Gitem Warlocks and getting bass here and there, very scattered around the lake and towards the end of the trip, young Dave working a wild shiner got the wake up call of a lifetime! A beautiful and very solid 10.14 pound largemouth bass, let me tell you, this youngster handled this hawg of a bass like a pro! Our main areas of concentration on Johns Lake has been scattered and isolated grass patches, docks and a few areas of open water holding some good hydrilla.

Butler Chain has also had some good action going on, Bass beds have been spotted all over the chain. Altho the beds we have spotted have been for the most part empty right now, we have caught some very good bass in the general areas that the beds are. Areas we have concentrated on have been grass beds very close to drop offs, as the bass have been staging to hit the beds. Butler itself has been the main producer for numbers and size with several 6 pounders being caught on anything from steelshad, gitem warlocks and spinner baits.

Please remember to catch and release, and this time of year, be especially gentle with the big gals, afterall they are what make fishing in florida awesome!

The month of April has seen some great bass fishing action, as well as some tough action as the cold front came thru. This front grabbed a hold of us for a good two days, and after some very good bass fishing action, it really put a clamp on the action. Bass were still caught, but we did have to work harder for our catch. We had a few days of combo trips, working live and artificial baits, for the most part, the artificial baits we used were Gitem Warlocks and 7 inch ribbon tail worms, both worked with a 1/16th ounce bullet weight in and around grass beds.

Tom and Robert had a day of high winds which limited us to certain areas on the lake, the bite was very scattered and very light, as the bass would just pick up the baits and swim some with it, heart breaking moment came with Tom getting a light tick and the bass swimming under the boat, only to turn and come back out and jump right next to the boat, this beauty was an easy 7 pounder, as she spit the worm and swam away.

Doug and Todd had two days with us on Johns Lake, the first day was once again very light hits on the baits, with winds still up and weather very cool to start the day, bass were scattered as we hit several areas to get our catch. Day two we had much better action with calmer winds and warmer weather. Big bass for them coming in at 5.13 pounds.
Brian and John had some good action as well on live baits, bass were schooling some in the cut but were very scattered, as most bass caught came closer to docks, with one dock yielding two bass within minutes of each other. For the most part, the live bait action has remained pretty steady on Johns Lake, schooling action has seemed to slow down some but the quality bass have picked up considerably as Doug and Todd saw on day two, catching only one dink, with the rest coming in between 2 and 4 pounds and very scrappy.

Using a lot of Gitem Warlocks, spinner baits and of course the Steel Shads.
Johns Lake for the most part, the early morning schooling has slowed to a crawl, with a few bass being caught in the Deer Island cut in the morning. We have caught some good bass in wide open waters on the main lake, as well as quality bass around isolated grass patches.

This seems to be a pattern that has held up for well over a month now. Several bass in the 5 pound class had made it to the boat in this time frame on Johns Lake.

Butler Chain was a little tougher fishing. Most casts were pin point under docks, and to grass patches with submerged wood close by. Lakes that produced for us were Tibet, Chase and Blanche. Memorable trip out there was with Chris G. We had been plugging away for some quality bass and Chris had told me his life long dream was to catch a 5 pounder.

His previous big fish I believe he said was 3 pounds and it was not even a bass, so mid way thru the day, I told him lets head to what I call ” junk lake” Lake Blanche, with all the docks and submerged wood, there had to be a big bass waiting for him. We got on a good stretch of water using the Warlocks, when Chris got hit and the bass didn’t stand a chance, and yes, his dream came true with a solid bass coming in right at 5 pounds on the gripper. Great job Chris, and when your back next year, we have to catch one bigger.

The last half of April saw some good bass fishing on Johns Lake and Butler Chain. Schooling action on Johns had been very limited for us in the mornings, but always got the day off to a good start. For the most part on Johns Lake, our bass have been coming off some of our typical deeper water areas. Steel Shads and spinner baits being the best at catching the bass, a few have been caught on smaller series Ugly Duckling crank baits.

Butler Chain we had spent most of our time on Lake Chase and Tibet-Butler. Lake Chase has been good working Gitem Warlocks and heavy one ounce Sugoi spinner baits in and around thinned out grasses and lily pads. Tibet-Butler we did have some schooling action, and the heavier spinner baits tossed into the schools picked off the better quality bass. Docks have produced some good bass with the steady action coming mainly around grass beds and areas with hydrilla mixed with the grass. A few of the deeper water areas have held some good bass, working the Steel Shad like a spoon has been a very good way to pick up some from the deep drop offs.

Florida Large Mouth Bass Description - The largemouth is the largest member of the sunfish family. It generally has light greenish to brownish sides with a dark lateral line which tends to break into blotches towards the tail. Often … END_OF_DOCUMENT_TOKEN_TO_BE_REPLACED

Lake Toho in Central Florida Located adjacent to the City of Kissimmee in Central Florida. The 18,810-acre West Lake Tohopekaliga has long boasted a reputation among both … END_OF_DOCUMENT_TOKEN_TO_BE_REPLACED

Butler Chain of Lakes in Orlando Florida Butler Chain of lakes in order... 1.Lake Down is the northern-most lake in the Butler Chain with 872 acres of Fish-able clear water. Public Access is located … END_OF_DOCUMENT_TOKEN_TO_BE_REPLACED

Lake George Fishing The history of Lake George fishing dates all the way back to World War II. There’s even a bombing range on the lake that was operated by the US Military in Ocala National … END_OF_DOCUMENT_TOKEN_TO_BE_REPLACED