The month of October has seen some very good bass fishing action here in Orlando.
Johns Lake has seen some good schooling action in the early morning hours with us catching them on steel shad, gitem shad and curly 7’s.

Most schooling action has been in the Deer Island Cut with some action coming mid lake. Waters are up and bass have new feeding areas due to this, so some of the more common haunts have not produced as well as in the past. Making adjustments to your normal fishing patterns will make a big difference in what you catch, and how much you catch.
Grass beds and offshore submerged hydrilla have been a huge key to success in keeping the action going steady during the day. Top water action is here! 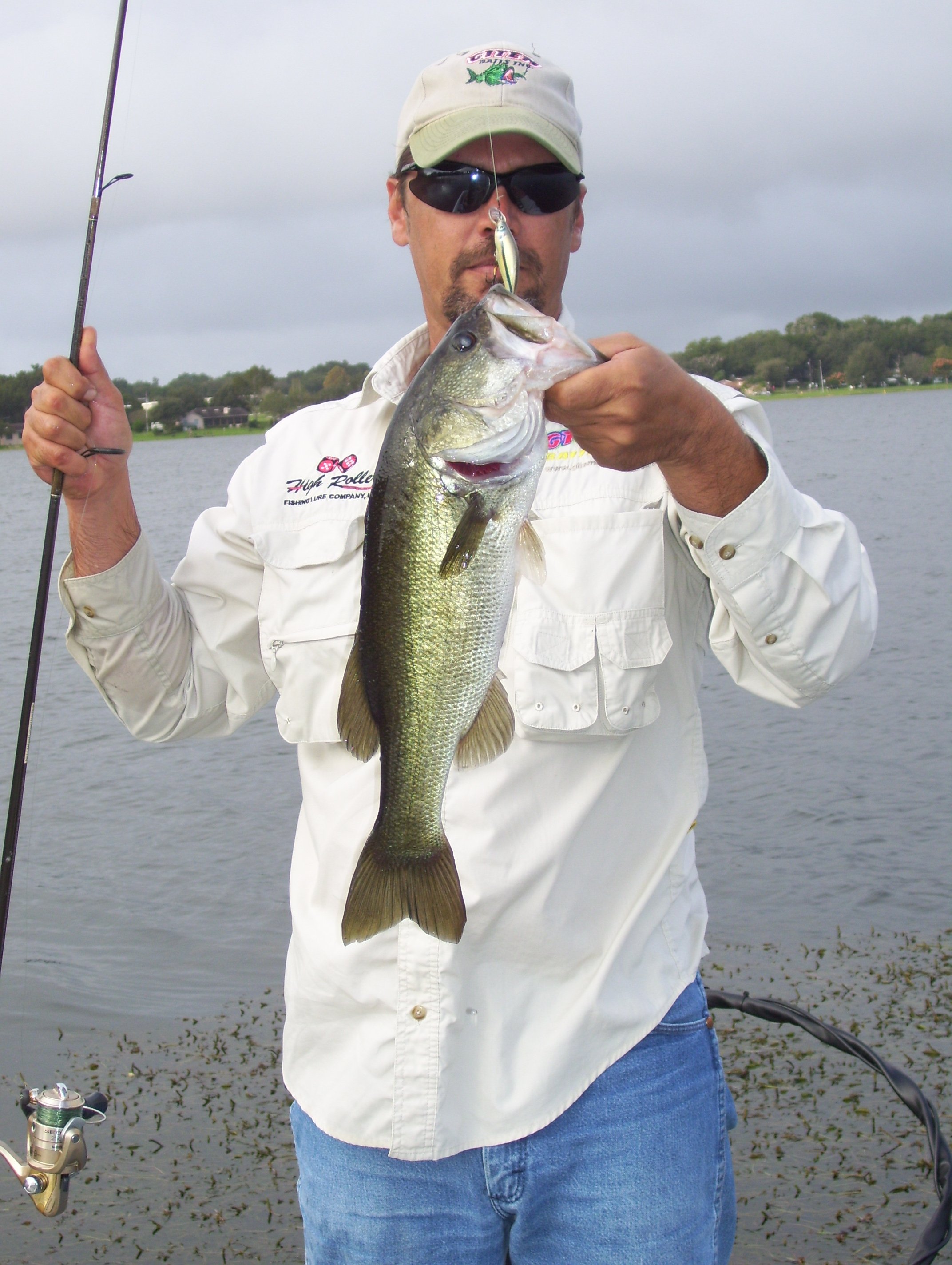 Gitem toads and torpedoes getting some good action.

Butler Chain has been pretty typical with the action coming mostly on wacky rigs skipped under docks. We have gotten on a good spinner bait bite as well along with rattle traps and c-rigged gitem warlocks. Lakes Butler and Down have been very good to us especially in deeper waters, working drop offs has seemed to be the spot as well as areas with sunken trees, as the bait fish have been stacking up in these areas pretty good as of late.

Lake Toho has been doing good, with a few runs out there lately steel shad have done very good in open waters, as well as working along hydrilla beds and grass edges. Toads and 10 inch worms have been great coming across topped out hydrilla as well as thru scattered grasses.

November is shaping up to be a great month for bass fishing. Temperatures, water and air are cooling down, making it much nicer to fish than the hot summer months, and with the cooler waters, bass are getting much more active. Live bait bite should be good as usual, and we should have some good top water action as well. Schooling action is typically good in November and we fully expect it to carry on right thru the end of the year. Just take a look at the pictures from previous Novembers and this is what you can expect to happen on any give cast. This is also the time to really start considering that Crappie trip, slabs will be plenty and makes for a very exciting time on the water as well as bass fishing.

Last few days has been runs out on the Great Butler Chain of Lakes.

Trips have been a mix of shiners and artificial baits. Domestic shiners have been the best producer as far as the live bait went, as they are a very close resemblance to the great shad population this chain of lakes has.

Morning bite has generally been the best producer before the sun gets to high. There has been a lot of schooling activity as of late and most all the schoolers being caught are in the 3 ½ to 4 ½ pound ranger and in Kevin’s words” she fought like she was a smallmouth bass. The cleaner waters, much cleaner than the typical Florida lake makes these bass a much healthier bass and you get more of a fight which makes it much more exciting.

Gitem Toads, which can be bought online at GitemBaits.com has been the best bait for some serious top water explosions. Gitem Sugars and KO’s are also getting good numbers pitched and flipped into grass beds as well as hydrilla and eel grass beds.

Water levels are dropping with the lack of rain, so please be cautious motoring thru the canals going from lake to lake. Till my next report, Tight Lines and great fishing.

Water Temps are on the rise with day ending surface temps running between 74 and 77 degrees. Topwater bite has been pretty good first thing in the morning with Gitem Toads in white color leading the way with the bigger catches. Lakes Down and Lake Butler have been the main producers. Worms pegged with 3/8 ounce weight have been catching a few here and there off the grass beds and in the eel grass beds, 10” Black/red flake have been the best producers.

The shiner bite is still going good on Lakes Down, Little Lake Down and Lake Louise.

Slow trolled thru eel grass and hydrilla have been the way to go early in the day. As temps warmed, a small split shot 12 inches up from the shiner in waters ranging from 10 to 16 feet have seen some good bass fall to our offerings. We actually have a day off next week, and we will be out on Butler Chain trying out the new drop shot baits from Gitem Baits as soon as we have them in our hands.

Today we had a free day and decided to head back to Johns Lake on the Orange/Lake border off Hwy 50. Game plan was to be to get in some drop shot fishing, but with higher winds we opted for rattle trap and senko type baits.

Started the day out tossing rattle traps at and along the grass beds along the East shore of the main lake. Picking up a few here and there, but the were definitely hitting the trap hard. Southern end of the main lake has some great grass beds, they just didn’t produce for us today. Most bass caught, all but one on Rattle Traps, blue/chrome with black tiger strips, were in and around the grasses. One solid hit on a Sticko from Bass Pro Shops.

Lake waters have dropped as expected with the extreme lack of rain, but remain very clean, longer casts and lighter lines were a definite difference maker. Offshore grass beds held a few bass, which were rather aggressive on the strike. Look for submerged grasses and sunken trees/branches and bang the traps thru and hold on.

Butler Chain the last couple days has been hot one day and a little slow the next.
Bass were still being caught but some days you had to work a little harder than normal.
Trips were mixed bag of tricks, shiners and artificials. Shiners had produced in Lake Louise and Isleworth, eel grass beds in Louise and deep waters in Isleworth.
Early morning topwater bite is still doing good, with toads and poppers leading the way.
Afternoon bite has been mostly Fluke type baits and senko type baits, 1/16th ounce bullet weight, screw in type, and bouncing them around in deeper waters ranging from 8 to 14 feet.

Lake Tibet has been unusually slow for us but has showed signs of coming back, Lakes Down and Little Down have been having good schools of shad getting blown up on, bass have been gorging themselves on these shad, so if your shiner fishing, best bet is DOMESTIC shiners, as they are a closer resemblance to the shad in color, Wild shiners will work, but domestics have been out catching them.

Spinnerbaits in white, Long A type baits, clear with a blue tint to them have also been producing on Lake Down. Bass have been cruising and hiding up in lily pad fields, topwater aspect of it, GITEM TOADS, bass got nuts over these things in the pads, and also a 10 inch worm, Black with red flake, 1/16th ounce bullet weight pegged and worked thru the pads has been a good ticket also.

Florida Large Mouth Bass Description - The largemouth is the largest member of the sunfish family. It generally has light greenish to brownish sides with a dark lateral line which tends to break into blotches towards the tail. Often … END_OF_DOCUMENT_TOKEN_TO_BE_REPLACED

Lake Toho in Central Florida Located adjacent to the City of Kissimmee in Central Florida. The 18,810-acre West Lake Tohopekaliga has long boasted a reputation among both … END_OF_DOCUMENT_TOKEN_TO_BE_REPLACED

Butler Chain of Lakes in Orlando Florida Butler Chain of lakes in order... 1.Lake Down is the northern-most lake in the Butler Chain with 872 acres of Fish-able clear water. Public Access is located … END_OF_DOCUMENT_TOKEN_TO_BE_REPLACED