2. At Auburndale, bass active early and before and after showers, with bass up to 7 pounds on Rochelle, Haines and Alfred, reports Ron Schelfo at Ron’s Tackle Box in Lake Alfred. Doug Yutzy and Sean Phelps weighed in a 28-pound, 10-ounce stringer on north chain (Rochelle and Haines) April 13 in Polk County Bass Anglers tournament, including 6-pound, 10-ouncer for Yutzy. Schelfo said there was a 7-pounder Saturday on Lake Alfred with an 8-inch red shad ZetaBait Gillraker worm. Lot of shellcracker and bluegill at Rochelle and Haines on crickets and red worms, Schelfo said. Catfish good at Simmers-Young Park, reports Stacy Roberts. There’s a free kids fishing derby there Saturday morning.

3. At Winter Haven, Tom Linson produced a 10-pound, 1-ounce bass on Lake Summit last Thursday evening in Ron’s tournament on south chain. Schelfo said the bite was on with quite a few bass 4-5 pounds and red shad stick-baits and Flukes producing. Jacob Rogers caught a 5-pounder Saturday and teamed with Gabe Gelb to win with 17 1/2 pounds in BHS Fishing Team tournament out of Cannon — Tammie Ferguson reports the 14 teams headed to Spring Lake for the most bass 3-5 pounds in team history that had “camera phones blazing.”

4. At Lake Hamilton, bass 3-5 pounds are feeding actively around the grass lines on a variety of lures and wild shiners. Bluegill are improving.

7. At Lake Hatchineha, Lake Cypress remains hot spot for bigger bass around open-water hydrilla on soft plastics, lipless crankbaits, swimbaits and spinnerbaits, with boats lining up from center marker to “Hole in the Wall” on south shore, said Leo Cosce. Shellcracker bedding in lily pads to the left of Cypress Canal entrance, just beyond No. 10 Marker, and around Catfish Creek, said Cosce. Still some specks along deeper hydrilla edges in Cypress.

8. At Lake Toho, team of Woods and McDuffie won Crackerboys tournament out of Southport Park Saturday with 9.84-pounder and 26.08 pounds, but no word of which lake they were on, and 19 bass 5-8 pounds. Cody Detweiler at Big Toho Marina said the artificial bite is coming around on Flukes, Senkos and 10-inch worms around open-water hydrilla, with a lot of shad moving around but no schooling activity noticed yet. Guides averaging 20 bass per trip up to 7-8 pounds on wild shiners. Ton of bluegill and shellcracker in grass/lily pads. Specks slowing down.

11. At Crooked Lake at Babson Park, big bedding bluegill are giving small bass a run for their money. Nine-year-old Jessy Smith of Valrico caught six 10-inch bluegill on red worms, and together with four adults they iced down a total of 26 in grass and lily pads, reports Cindy Ritchison at Bob’s Landing. Bass up to 4 pounds in Sunday Open tournament, but only 7 pounds to win, on 7-inch worms and deep-diving crankbaits. Speck boats getting 18-20 per trip averaging 12 inches at night on minnows.

12. At Frostproof, good numbers of bass 3-7 pounds on Reedy and Arbuckle in weekend tournaments. Don Smith and Ricky Timmerman had almost 4-pound average on Reedy in Lake Wales Po’ Boys event, and Mark Browning and Johnnie Renner netted 17.65 pounds on six bass at Arbuckle in the Mosaic tournament.

13. In the phosphate pits south of Mulberry and Bartow, bass 5-7 pounds active in mornings with frogs, swim-baits or plastic worms and Senkos. 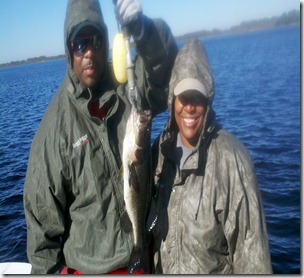 Capt. Tim Fey reporting for Central Florida area. We have had allot of rain, creating moving water and the bass are on the move. Jack and I were out on East Lake Toho this morning scouting and checking out the flow and how it was going to affect the bass out here. Very strong flow coming thru the canals made for some good fishing using Red Eye Shads, Whacky rigged and T-Rigged senkos and lizards. We are going into Fall a time of  weather and water temperatures fluctuates.  The bass will be  moving from shallow water to to deeper water in rapidly cooling water from rain and wind, making great fishing. Due to rains the water levels are looking great.

Come catch your bass with us now!!!

Florida Large Mouth Bass Description - The largemouth is the largest member of the sunfish family. It generally has light greenish to brownish sides with a dark lateral line which tends to break into blotches towards the tail. Often … END_OF_DOCUMENT_TOKEN_TO_BE_REPLACED

Lake Toho in Central Florida Located adjacent to the City of Kissimmee in Central Florida. The 18,810-acre West Lake Tohopekaliga has long boasted a reputation among both … END_OF_DOCUMENT_TOKEN_TO_BE_REPLACED

Butler Chain of Lakes in Orlando Florida Butler Chain of lakes in order... 1.Lake Down is the northern-most lake in the Butler Chain with 872 acres of Fish-able clear water. Public Access is located … END_OF_DOCUMENT_TOKEN_TO_BE_REPLACED

Lake George Fishing The history of Lake George fishing dates all the way back to World War II. There’s even a bombing range on the lake that was operated by the US Military in Ocala National … END_OF_DOCUMENT_TOKEN_TO_BE_REPLACED