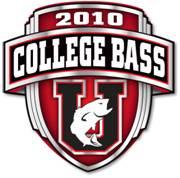 ATLANTA (April 5, 2010) – The College Bass Tour heads to Alabama’s capital to kick off its 2010 season with the College Bass East Super Regional during the second annual Bite the Tail off of Cancer Crawfish Boil Saturday, April 10-Sunday, April 11. The College Bass tournament gets underway with daily morning launches at 6 a.m. CDT at the Riverwalk Amphitheatre docks and culminates with the afternoon weigh-ins at the College Bass stage at 3 p.m. CDT.

This is why Alabama is blessed when it comes to bass fishing and we’re thrilled to have the best collegiate anglers here to showcase it,” said Branch Kloess, director of Riverfront Facilities for the city of Montgomery. “We’re very excited to welcome the College Bass Tour to Montgomery as part of our second annual Bite the Tail off of Cancer Crawfish Boil.”

The Eastern Kentucky University team, Richard Cobb and Tyler Moberly, secured the 2009 College Bass East Super Regional title by more than five pounds on Clarks Hill Lake in Evans, Ga. with a two-day total weight of 24.84 pounds. But two Alabama teams landed in the top five; including Richard Peek and Mason Craver of Auburn placed second with 19.83 pounds and Kyle Tindol and Michael Eubanks of Faulkner claimed fifth with 16.8 pounds.

“We’re excited that the East Super Regional will be held on home waters. It’s a great way for the state to show off our excellent fishing,” said Tindol of Faulkner University.

Two-person teams from colleges and universities all over the Eastern region will fish for the 2010 College Bass East Super Regional title, more than $7,000 in scholarship monies and prizes and the ultimate college bass bragging rights. Teams will fish the Alabama River, known for giant spotted bass, largemouth bass, striped bass and white bass. Anglers from each participating school will fish for large-mouth and spotted bass 12 inches or longer, with a five-fish limit. The heaviest two-day weight will determine the East Super Regional winner.

“We’re delighted to bring the College Bass Tour to Alabama for the first time,” said Hank Weldon, College Bass tournament director. “It’s an honor for College Bass to be a part of the Cancer Crawfish Boil and help raise money for such a great cause.”

In its sixth season, College Bass will receive extended television coverage on ESPNU that will include coverage of the College Bass Super Regionals for the first time ever. ESPNU reaches more than 64 million households across the United States. Additionally, all Super Regional events will be live Web-streamed on www.CollegeBass.com.

Daily Weigh-Ins: 3 p.m. at the College Bass stage at the Riverwalk Amphitheatre

8
University of Alabama at Birmingham

3
University of Louisiana at Lafayette

2
University of North Carolina at Charlotte

1
University of Tennessee at Chattanooga

About College Bass:
Since its inception in 2005, College Bass has been the pioneer in the emerging sport of competitive fishing at the college level with a nationally televised national championship comprised of a qualified field of student anglers. With more than 220 participating colleges and universities from more than 30 states and Canada, College Bass is a rapidly growing property with a mission of supporting student anglers and bass fishing at the club level. The 2010 season marks the sixth anniversary of the national championship event and will also feature three Super Regional events, an increase from two in 2009. Fans can follow the 2010 College Bass Tour online at www.CollegeBass.com and on ESPNU, which will televise nine hours of coverage beginning next summer. 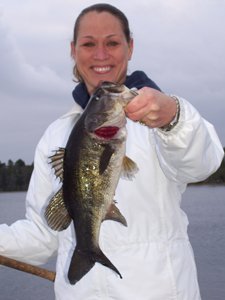 The end of March had seen some very good bass fishing action.

With several days of higher winds, we opted to hit Butler Chain, which gave us 12 lakes to pick from, with plenty of cover from the winds. Most trips out there had been all artificial bait trips, with spinner baits, buzz baits and senko type baits being the best producing lures.

We had a lot of very good action on Lake Sheen, grass beds had been good producers, but for those who wanted some steady action, secondary grass beds were the big key to catching bass. Slow rolled spinner baits thru these areas were very good with some solid and aggressive strikes. Lake Pocket was also holding some good bass, mostly around the docks, where we would skip a wacky rig all the way under them. 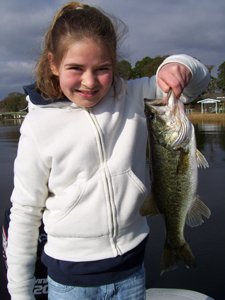 The mouth of the canal to Lake Blanche had a few bass beds right along the shoreline, with a few scattered bass on them, and after tossing everything but the kitchen sink at them, including a wild shiner, these bass wanted nothing to do with our offerings, so we moved into the main lake, where once again it was the secondary grass beds, with a good mixture of hydrilla where the bass were holding tight to. 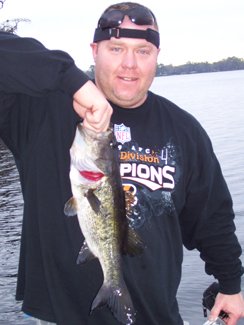 A couple trips to Lake Toho also produced some good action. Most of our time on Lake Toho has been spent in Gobblets Cove and in Friars Cove. Beds were scattered all over the place, with nothing on them, but the females were cruising the areas and very finicky with the bite. Trick worms and blade baits were great for some very good catching, and keeping the bite steady during the day. Running spinner baits thru the thinner areas of lily pads also produced some quality bass. Waters are warming up very nicely now, and we are seeing a lot of bait fish bunching up, which has been giving way to some very good schooling activity. Its top water time folks!!

The month of June has seen some good bass fishing action on both Butler Chain and Johns Lake.
Johns Lake has been good in the early morning with some good schooling action in the cut, as well as some in mid lake areas where hydrilla is present. Water levels are great out here with all the rains we have been getting, which in turn has made one of my favorite patterns very successful, and the is dock fishing! Skipping Gitem K.O’s under docks, as well as Bitsy Jigs have produced some good action as well as some good bass. As the heat of the day comes down on us, 10 inch worms worked in deeper waters, where grass and or hydrilla are present have kept the action steady.

Butler Chain has held pretty steady for us for the month of June. Again dock fishing has been a strong pattern for us, with a few days where the bass have seemed to disappear on us, we have found them deep in the slop. Under docks has been the Gitem K.O’s and Warlocks, when the bass have moved off the docks on us, we have tossed the Gitem Shad or Curly 7’s to the back of the grass or lily pads, and slowly swam it back out to get some good blow-ups and some solid hook ups.

We have had some days with a very light bite, you had to really keep an eye on your line and watch it, as some bass were just picking up our baits and slowly swimming them right back to us, we have made a slight adjustment to this, we added JJs Dippin Dye to our boat, and let me tell you, we had a day where the bite was soft, and we dipped the baits and got slammed!! This stuff really worked great for us, you can find a link for them on my home page in the Bass Fishing News box.

July we are expecting more of the same, early morning bite should still be productive with live bait or artificial bait. Even though we are in full swing of summer, with it getting pretty hot, the bass have still been playing pretty good for us, and once again as in years past, it seems the bigger bass have still wanted to show their faces in the heat of the day, all this requires is placing the bait in the right spot, which is generally tight to the cover, under the docks, or in the slop!

Florida Large Mouth Bass Description - The largemouth is the largest member of the sunfish family. It generally has light greenish to brownish sides with a dark lateral line which tends to break into blotches towards the tail. Often … END_OF_DOCUMENT_TOKEN_TO_BE_REPLACED

Lake Toho in Central Florida Located adjacent to the City of Kissimmee in Central Florida. The 18,810-acre West Lake Tohopekaliga has long boasted a reputation among both … END_OF_DOCUMENT_TOKEN_TO_BE_REPLACED

Butler Chain of Lakes in Orlando Florida Butler Chain of lakes in order... 1.Lake Down is the northern-most lake in the Butler Chain with 872 acres of Fish-able clear water. Public Access is located … END_OF_DOCUMENT_TOKEN_TO_BE_REPLACED

Lake George Fishing The history of Lake George fishing dates all the way back to World War II. There’s even a bombing range on the lake that was operated by the US Military in Ocala National … END_OF_DOCUMENT_TOKEN_TO_BE_REPLACED