Great finish to the day, on Lake Toho in Central Florida bass fishing! I really enjoyed having Mr. Gary Greenwood, and his nephew, Austin on the boat for a great day of Catching!

Till next time tight lines and good fishing…

2. At Auburndale, bass active early and before and after showers, with bass up to 7 pounds on Rochelle, Haines and Alfred, reports Ron Schelfo at Ron’s Tackle Box in Lake Alfred. Doug Yutzy and Sean Phelps weighed in a 28-pound, 10-ounce stringer on north chain (Rochelle and Haines) April 13 in Polk County Bass Anglers tournament, including 6-pound, 10-ouncer for Yutzy. Schelfo said there was a 7-pounder Saturday on Lake Alfred with an 8-inch red shad ZetaBait Gillraker worm. Lot of shellcracker and bluegill at Rochelle and Haines on crickets and red worms, Schelfo said. Catfish good at Simmers-Young Park, reports Stacy Roberts. There’s a free kids fishing derby there Saturday morning.

3. At Winter Haven, Tom Linson produced a 10-pound, 1-ounce bass on Lake Summit last Thursday evening in Ron’s tournament on south chain. Schelfo said the bite was on with quite a few bass 4-5 pounds and red shad stick-baits and Flukes producing. Jacob Rogers caught a 5-pounder Saturday and teamed with Gabe Gelb to win with 17 1/2 pounds in BHS Fishing Team tournament out of Cannon — Tammie Ferguson reports the 14 teams headed to Spring Lake for the most bass 3-5 pounds in team history that had “camera phones blazing.”

4. At Lake Hamilton, bass 3-5 pounds are feeding actively around the grass lines on a variety of lures and wild shiners. Bluegill are improving.

7. At Lake Hatchineha, Lake Cypress remains hot spot for bigger bass around open-water hydrilla on soft plastics, lipless crankbaits, swimbaits and spinnerbaits, with boats lining up from center marker to “Hole in the Wall” on south shore, said Leo Cosce. Shellcracker bedding in lily pads to the left of Cypress Canal entrance, just beyond No. 10 Marker, and around Catfish Creek, said Cosce. Still some specks along deeper hydrilla edges in Cypress.

8. At Lake Toho, team of Woods and McDuffie won Crackerboys tournament out of Southport Park Saturday with 9.84-pounder and 26.08 pounds, but no word of which lake they were on, and 19 bass 5-8 pounds. Cody Detweiler at Big Toho Marina said the artificial bite is coming around on Flukes, Senkos and 10-inch worms around open-water hydrilla, with a lot of shad moving around but no schooling activity noticed yet. Guides averaging 20 bass per trip up to 7-8 pounds on wild shiners. Ton of bluegill and shellcracker in grass/lily pads. Specks slowing down.

11. At Crooked Lake at Babson Park, big bedding bluegill are giving small bass a run for their money. Nine-year-old Jessy Smith of Valrico caught six 10-inch bluegill on red worms, and together with four adults they iced down a total of 26 in grass and lily pads, reports Cindy Ritchison at Bob’s Landing. Bass up to 4 pounds in Sunday Open tournament, but only 7 pounds to win, on 7-inch worms and deep-diving crankbaits. Speck boats getting 18-20 per trip averaging 12 inches at night on minnows.

12. At Frostproof, good numbers of bass 3-7 pounds on Reedy and Arbuckle in weekend tournaments. Don Smith and Ricky Timmerman had almost 4-pound average on Reedy in Lake Wales Po’ Boys event, and Mark Browning and Johnnie Renner netted 17.65 pounds on six bass at Arbuckle in the Mosaic tournament.

13. In the phosphate pits south of Mulberry and Bartow, bass 5-7 pounds active in mornings with frogs, swim-baits or plastic worms and Senkos. 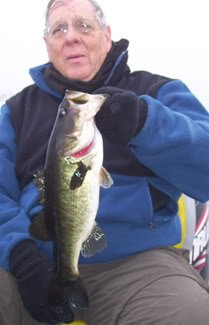 Kissimmee Chain of Lakes bass fishing has been doing very good for us. We have been focusing on mainly Lake Jackson as it has been producing not only some great numbers of bass, but some good size as well. We did a quick scouting trip out here to check out a few other spots. These spots in the past have produced some great trophy bass for us and have typically reloaded after a few months.

We hit the nail on the head this day. One of my favorite spots was holding a bunch of great bass and the action was pretty steady for us. We did start the morning our using live wild shiners, and as we moved to different areas we cracked out the artificial baits.

Zoom flukes in June Bug seemed to be the hot ticket with the artificial baits. Bass were relating tight to cover and seemed to prefer a mix of coverage. Lily pads with Kissimmee grass close by seemed to be the hot spots. Water temperatures started the day out at 52.7 degrees, yes folks we are in Florida, this has pushed the bass tighter to cover where we have been fishing and has made it much easier to target the bass. Once again we have seem bass with the tell tale sores on the tails from fanning beds and we have started to spot scattered beds around the lake. 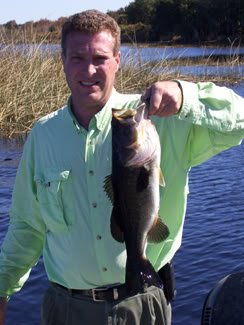 Bass Fishing in Florida is still a hook setting bonanza. Sid returned once again for some great bass fishing action out on Lake Jackson here in Central Florida. We started the day out hitting the ramp very early so we were on our first spot just before 7am. Cooler temperatures than the day before and a fog that did not let go of us until just after 10am, looked like it was going to be a tougher day than we had been used to.

We started out on that first spot, which had been great at producing not only some good numbers of bass, but also some pretty good sized bass as well. Today was a day of all wild shiners and the bass did not let us down. Tossing free lined shiners to the edges of the lily pads was the way to go, one thing we did notice was the placement of the shiners today was the big key to catching the bass. Placing the bait  a couple feet from the pad yielded little to no action at all, but if they were placed within inches of the pads, the bass played very good for us.

With the wind constantly changing directions on us, the Dig In Anchor system was awesome at holding us in place and allowed us to pin point our casts to the edges with no problem. This was a great bass fishing day for Sid, as he boated not only 21 bass in four hours, but also landed three catfish a pickerel and a big bowfin. Lot of action for Sid today and I got a pretty good work out myself zipping around the boat netting all of his fish today.

I still have a few open dates for December and January while February is booking up fast. We are expecting yet another very busy spawn season as we did this previous season, so book your bass fishing trips soon. 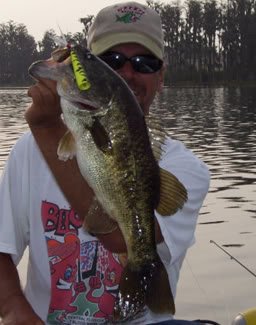 November Bass Fishing, Folks this is the time of year we really start to get excited. Cooler weather has finally grabbed a hold of us which makes things very nice when you’re out on the waters of Central Florida chasing after those trophy bass we have down here. Live wild shiners become one of the main baits of choice for many anglers, as they start that search for the big ten pound plus trophy largemouth bass. 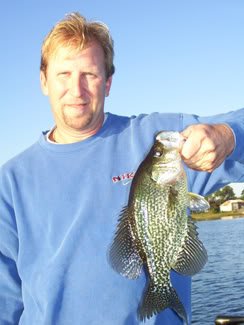 Central Florida has the lakes that can and will produce trophy bass every year. Lake Toho being one of the main targets of many anglers, and this great body of water will yield more than its fair share of the lunker bass. Lake Kissimmee will also produce so big monster bass as well. With the main targets being grass beds and skinny waters closer to shore, as the bass are getting closer to spawn time.

Years past we have come across bass beds by the first week of December, but a lot of this will be hinged on how the weather treats us as well. With a steady weather pattern it is very possible to start catching bass from beds by the end of the month, although the spawn generally will not hit full swing until January or February.

Butler Chain and Conway Chain will also be some great bass fishing action. Bother these bodies of water have some of the cleanest waters around, and both are well known for bass schooling action. Both these areas not only hold some of the deeper water action, but they also have a ton of docks that can be fished, and these docks will hold some great bass. We round out Central Florida Bass fishing with Johns Lake. Johns Lake is known for some great bass schooling action and when the spawn hits, this place can compete with Lake Toho when it comes to trophy bass fishing. Don’t forget, we also have some pretty darn good crappie fishing here in Central Florida as well.

The Orlando area is well known for having some of the best Florida trophy bass fishing action in the state. There is a variety of fishing lakes to choose from to include Lake Kissimmee, the Butler Chain, Johns Lake, East lake Toho, Lake Rosalie, Clermont Chain, Walk in Water, Lake Okeechobee, Lake Rousseau, Lake Istokpoga, Harris Chain of Lakes and the World Famous Lake Toho. With over 20 years of experience on these, and several other lakes in the area, we feel we can offer you the best options, and the best chances possible of getting that 10 pound bass, and make your dreams come true.

For the months of July thru October, we will be offering two different bass fishing packages.

3 DAY SPECIAL
2 people – $1025.00
3 days of trophy bass fishing on 3 different lakes in Central Florida
This will definately give you the best chance for catching that trophy bass.

“Remeber, there is no substitute for time on water. More time, more opportunity”

2 DAY SPECIAL
2 people – $700.00
2 Days of Orlando Bass Fishing
You will be fishing 2 different lakes
Still giving you the same chance at catching that trophy bass.

A third person can be added for a $75.00 fee per day. All the tackle is supplied, cooler, ice and bottled water. Live bait can be used, but there is an extra charge.

There is no required deposit per day to secure your trip dates. All deposits can be caneled with in 48 hours with no cost to you.
These were very popular packages last year, so book soon to secure your dates, as they fill up fast.

Florida Large Mouth Bass Description - The largemouth is the largest member of the sunfish family. It generally has light greenish to brownish sides with a dark lateral line which tends to break into blotches towards the tail. Often … END_OF_DOCUMENT_TOKEN_TO_BE_REPLACED

Lake Toho in Central Florida Located adjacent to the City of Kissimmee in Central Florida. The 18,810-acre West Lake Tohopekaliga has long boasted a reputation among both … END_OF_DOCUMENT_TOKEN_TO_BE_REPLACED

Butler Chain of Lakes in Orlando Florida Butler Chain of lakes in order... 1.Lake Down is the northern-most lake in the Butler Chain with 872 acres of Fish-able clear water. Public Access is located … END_OF_DOCUMENT_TOKEN_TO_BE_REPLACED

Lake George Fishing The history of Lake George fishing dates all the way back to World War II. There’s even a bombing range on the lake that was operated by the US Military in Ocala National … END_OF_DOCUMENT_TOKEN_TO_BE_REPLACED