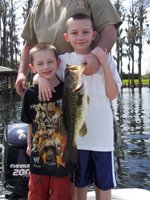 The month of February has seen some very good bass fishing action here in Orlando. We have had most of our focus on Butler Chain and one of the private lakes that I fish. Butler Chain we have had some good bass come off beds, despite high winds that had consistently pounded us along with what seemed like an endless run on cold fronts. 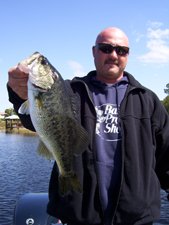 Most of our trips this month were with artificial baits, with steel shad and a wide range of Gitem Baits catching most of the bass. Steel Shad have been doing a great job in deeper waters when fronts have hit us, working them mostly in 10 to 16 feet of water, almost slow rolling them, with the very tight wobble and close resemblance of bait fish, these baits have been awesome. 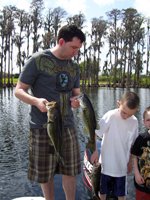 Gitem Baits have been plugging the bass for us in and around scattered grass beds, offshore hydrilla beds and docks. The Twin Liz and the Curly 7 have been doing great tossing them under docks texas rigged with a 1/16th ounce screw in weight. The Gitem Curly 10 has been great pulling it thru heavy eel grass to catch some nice quality bass, one day numbers will be up, and size down, but only to be followed up with some very solid bass being caught the next day.

We have found when the fronts have rolled thru, the bass were pushed away from the beds, but still in the area, so setting up 30 feet off the bedding areas had been the key to catching the quality bass, with some good schooling action 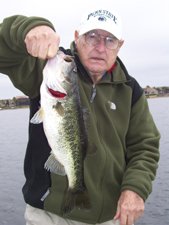 towards the end of the month. Shiner fishing has been doing good, slow trolling the shiners with no float around deep drop offs on Lake Butler itself has produced some quality bass. Lakes Chase and Blanche have also held some good action, Chase has been good in areas where the lay downs are as well as Blanche. Blanche has been very good around the docks as well as just offshore from the docks, finding the offshore hydrilla has produced some very good quality bass. 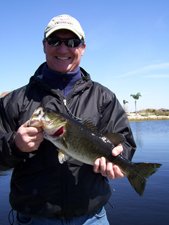 The month of March has carried over pretty much from the same action we have seen in February, although the majority of the bass had already spawned, we still were catching some bass off beds, or cruising around the beds. Butler Chain we have been catching most bass just off the grass beds and under docks, wacky rigged Gitem KO’s have been doing great under docks as well as the curly 7’s.

Johns Lake has started showing some limited schooling action in the Dear Island cut, steel shad and High Roller Rip Rollers have got some good action. A few docks have produced on Johns Lake for us the past month, but one of the biggest patterns seems to have been isolated grass patches worked with either the KO’s or the curly 7’s in Florida Grass color. A few bass have been caught on smaller crank baits in 2 to 4 foot of water as well.

Both Butler and Johns Lake the Crappie bite has been limited and very scattered, some being caught early morning in deep water, while majority have been caught around the grass beds, size of crappie has been down the last 2 weeks.

Private waters have been producing some very good numbers, along with some size, all bass have been caught on artificial baits with bass coming from docks and grass beds. Wacky rigged KO’s and Shad have been the way to catch them.

My reports have been slow coming the past 2 months but I should be back on schedule with them now, we have launched a new web site Thefishingtube.com which has taken up most of my free time. This web site is totally free so we want everyone to come join us, create yourself a member user name and set up your profile, you can upload pictures and videos. We currently have a teaser show filmed and uploaded with Pro Golfer JB Holmes and on our Skill Zone I am Hosting How to Videos. I would also like to welcome Deep South Fishing Rods to our family, as a sponsor on both our Fishing Show and my Guide Service. These rods are awesome, so please check them out.

Florida Large Mouth Bass Description - The largemouth is the largest member of the sunfish family. It generally has light greenish to brownish sides with a dark lateral line which tends to break into blotches towards the tail. Often … END_OF_DOCUMENT_TOKEN_TO_BE_REPLACED

Lake Toho in Central Florida Located adjacent to the City of Kissimmee in Central Florida. The 18,810-acre West Lake Tohopekaliga has long boasted a reputation among both … END_OF_DOCUMENT_TOKEN_TO_BE_REPLACED

Butler Chain of Lakes in Orlando Florida Butler Chain of lakes in order... 1.Lake Down is the northern-most lake in the Butler Chain with 872 acres of Fish-able clear water. Public Access is located … END_OF_DOCUMENT_TOKEN_TO_BE_REPLACED

Lake George Fishing The history of Lake George fishing dates all the way back to World War II. There’s even a bombing range on the lake that was operated by the US Military in Ocala National … END_OF_DOCUMENT_TOKEN_TO_BE_REPLACED